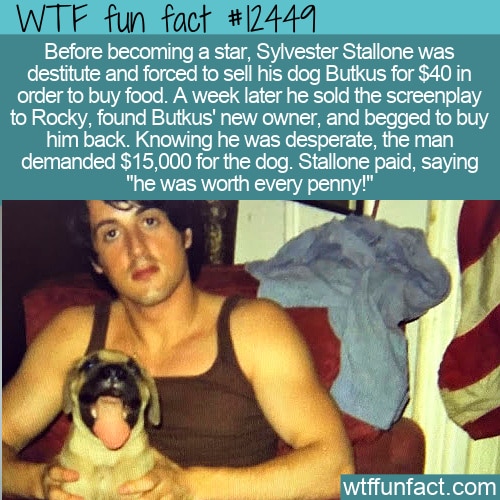 We heard this one straight from the legendary actor’s mouth (or Instagram page, which in 2022 is roughly the same thing).

It’s a pretty sad fact, actually. Having to sell your dog for food because you’re both starving must be heart-wrenching. And making the journey to repurchase him, paying out some of the first money you’ve laid eyes on in years sounds like it comes straight from a movie.

But here’s the skinny from Sly himself, which he posted alongside a photo of him and Butkus as a pup from 1971:

“1971… Since we’re on the subject of ” man’s best friend” this is myself and Butkus as a puppy, we were both, thin, hungry and living in a flophouse above a subway stop, I used to say this apartment had ” … Hot and cold running roaches” anyway there was not much to do except spend time with each other and that’s where I started to learn the craft of screenwriting. Since I never went out, I relied on his companionship, And actually it was his idea to write Rocky, but don’t tell anyone…. Years later when things got even worse I had to sell him for $40 in front of a 7-Eleven store, because I couldn’t afford food, then like A modern day miracle, the screenplay for Rocky sold, and I could buy and buy him back, but the new owner knew I was desperate, and charged me $15,000 … He was worth every penny! #NewYorkCity #HellsKitchen#BullMastiff#It‘sADogsWorld. #MoreToCome#inspiration#ThunderingYourHeart#GoingThedistance“

Now, to be completely honest, we were most surprised that Stallone was a screenplay writer and that he wrote the screenplay for Rocky. In fact, he wrote it in 3-and-a-half days, right after watching the championship match between Muhammad Ali and Chuck Wepner on March 24, 1975.