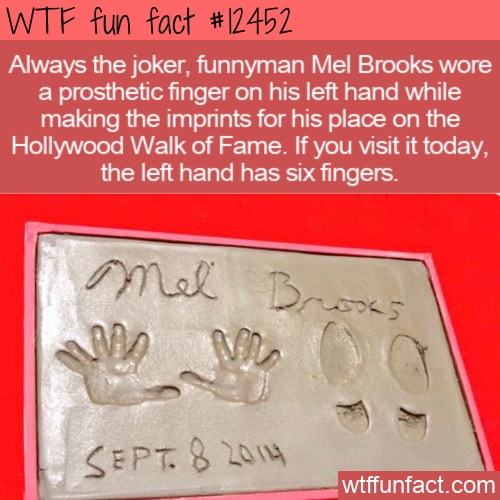 Mel Brooks – what a gas! The comedian and director of Young Frankenstein decided to celebrate his memorialization at Hollywood’s Chinese Theatre by giving fans the finger. The 11th finger, that is.

It’s true; Mel Brooks had 11 fingers when he pressed his hands in the cement at the ceremony to celebrate the 40th anniversary of his film Young Frankenstein. But one was a prosthetic.

A mere 88 years young at the time, Brooks explained his shenanigans later that same day on Conan O’Brien’s Late Show:

“I wanted to do something just a little different, I didn’t know what,” he told O’Brien. “So I got another finger.”

At the time of the ceremony, he joked around with his son: “About time, huh,” Max Brooks reportedly said. “Comedians never get their fair share of recognition in Hollywood…”

At the time, Mel Brooks gave a heartfelt thanks to his fans, saying: “I want to thank you all for being here and being part of the wonderful charade. I really love it.”

The charade involved an extra finger, but it seems it was one of the polite ones.