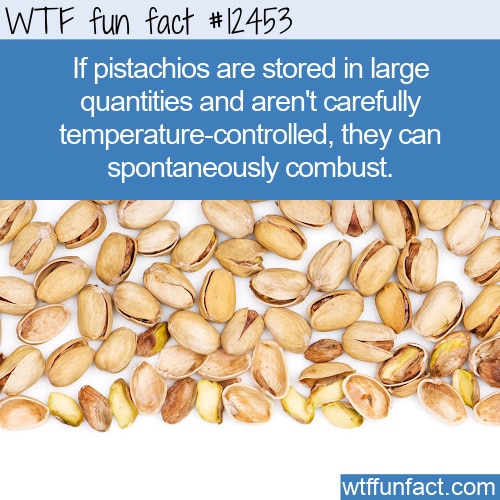 Pistachios are delicious and nutritious but also a little bit dangerous at times.

So, first of all, pistachios are pretty hard to grow, which helps explain why they’re so expensive. The trees on which they grow are very temperamental, requiring long, hot, dry summers and no ground freezes. A pistachio tree also won’t produce the goods if it doesn’t have about 1000 total hours of dormancy at a temperature of about 45 degrees. Oh, and they hate humidity. So if you have a friend or officemate who can never get the temperature right, you kind of know what we mean here.

After they made their way across the alps, they were known as the “Latin Penny Nut” and used for all sorts of Italian cooking. Then, after WWII, they became a snack food.

In the U.S., pistachios are domestically grown, and 99% come from California, representing a $1.6 billion boon to the economy. The rest are grown in Arizona and New Mexico.

Ok, but here’s the thing about pistachios – they need to be stored very carefully. Otherwise, they develop mold-related aflatoxins, which are toxic, carcinogenic, and deadly. And they can also explode.

You’re probably here to read about the exploding part, so let us set you at ease – this generally happens during shipping, so you don’t have to worry about losing an eye while having a healthy snack. You might have to worry, however, if you’re towing around a big heap of these things.

When pistachios are loaded up and transported, they need the right temperature and pressure at all times. Pistachios have a low water and high fat content. But when they’re kept in humid conditions, the water content can expand and can start a reaction in which fat-cleaving enzymes produce free fatty acids. You don’t need to understand the details of that, but what’s important is that those fatty acids get broken down when the nut takes in oxygen. The nut then spits out carbon dioxide, which creates heat. If you have a whole bunch of nuts stored, and they’re all giving out heat because it’s too humid, that heat will build up until…you guessed it – they all catch fire and explode.

So, yes, pistachios can spontaneously combust under the right circumstances. – WTF fun facts