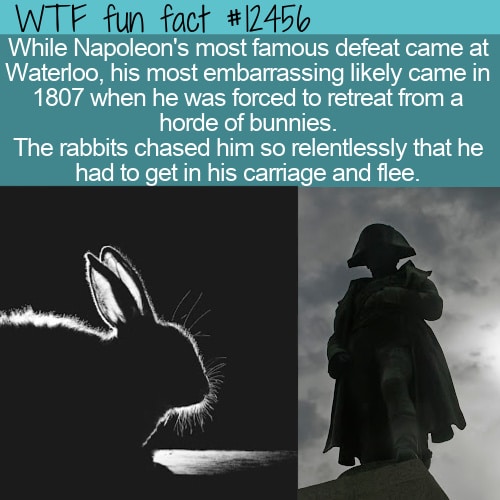 There are so many stories about Napoleon out there that it’s hard to tell which ones are true at this point. They’re like Einstein quotes – half of them are just made up!

But this was has a few different sources, and it’s too funny not to share since it is, technically, part of the historical record of the famous French emperor.

As the most trustworthy version of the story goes, in July 1807, France and Russia ended the war between their empires by signing the Treaties of Tilsit. That’s enough to put anyone in a celebratory mood, especially since it drew the countries into an alliance at the time that would render the rest of Europe largely at their mercy.

Looking for a way to keep the good times rolling for a few more days, Napolean invited the military higher-ups still present to a rabbit hunt (which is the kind of thing rulers did for fun back in those days). Napolean’s only mistake was entrusting the collection of the rabbits to his chief of staff, Alexandre Berthier.

No one knows quite how many rabbits Berthier collected (hundreds or up to 3000, by some accounts), but it was a lot. And if you know anything about rabbits, they’re a bit hard to catch in such enormous numbers in a short period of time. So Berthier’s men brought in cages and cages full of domesticated rabbits.

Now, this is already a mistake because domesticated rabbits will not take off running – when they see humans, they assume they are being fed. But when the boss tells you to bring him a bunch of rabbits, you have to find some way to make him happy, even if that means rounding up bunnies from local farmers.

The afternoon unfolded in much the way you might assume. As the cages were opened, the rabbits didn’t scurry away. In fact, they scurried towards Napoleon. Who knows, maybe he had a lot of lettuce in his teeth after lunch. Or, more likely, they hadn’t been fed in a while.

Whatever attracted the rabbits to the emperor must have been something special because hundreds of bunnies were said to have swarmed him relentlessly. I mean, you have to laugh, right?

Napoleon did laugh at first, or at least he took it in stride, probably thinking that a few shots fired in the air would set things straight. But that didn’t work either, and it is reported that more and more bunnies thought “swarm the emperor” was a fun new game they were all playing.

Things got trickier as the mass of bunnies started climbing his legs and up his jacket. The guy was genuinely at a loss, especially when trying to shoo them away with his riding crop didn’t work. His coachman cracked his whip, hoping the noise would scare them away, but no luck.

So what’s a man to do when nature shows him who’s boss? In this case, hop in the carriage and try to get the heck out of there.

Lucas Reilly, writing for the website Mental Floss, found a great quote from historian David Chandler, who described the next stage of the bunny attack:

“…with a finer understanding of Napoleonic strategy than most of his generals, the rabbit horde divided into two wings and poured around the flanks of the party and headed for the imperial coach.”

In the end, Napoleon retreated, fleeing to his carriage. It was no defeat at Waterloo, but it was probably just as unexpected. –  WTF fun fact

Source: “The Time Napoleon Was Attacked by Rabbits” — Mental Floss