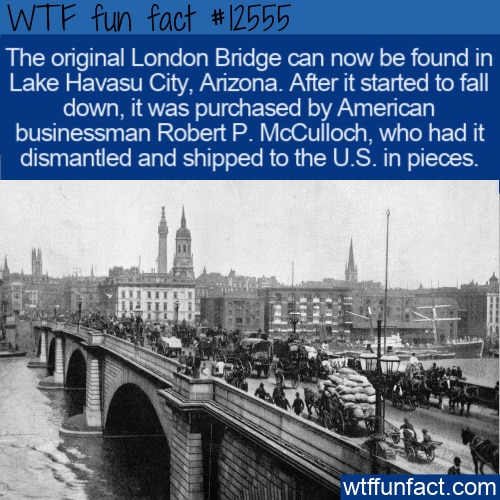 Did you sing this song as a kid? We sure did, although we had no idea just how many more verses it had – there are lines about building it up with iron bars as well as gold and silver, but in the end, the bridge was simply taken down and replaced.

Originally built in the 1830s, it spanned the River Thames in London, England. But by 1968, it was up for sale. We can’t really relate to the desire to buy an old bridge that’s falling down, but apparently, millionaires can. American entrepreneur and chainsaw manufacturer Robert P. McCulloch (who also inherited a fortune from his grandfather) decided to buy the bridge to serve as a tourist attraction in the new community he was planning in Lake Havasu City, Arizona. He paid $2.5 million (but there wasn’t exactly a bidding war over it).

And what millionaires want, they tend to get. He bought the bridge, had it dismantled, and transported it to Arizona on a cargo ship. After sailing through the Panama Canal, it landed in Long Beach, California, and was trucked to Lake Havasu City. There, it was reassembled and opened in October 1971.

But you don’t have to worry about using a crumbling old bridge if you visit it. The masonry from the old bridge simply forms the outer structure of the new “London Bridge,” which includes reinforced concrete. It now connects an island in the Colorado River with the main part of Lake Havasu City.

Now, when we say it connects an island, we don’t mean that a bridge was needed there. In fact, a canal was dug to create the island after the bridge was built. But it had the intended effect. Interest in buying land in the area increased, and it did indeed become a tourist destination (and it still is to this day). –  WTF fun fact