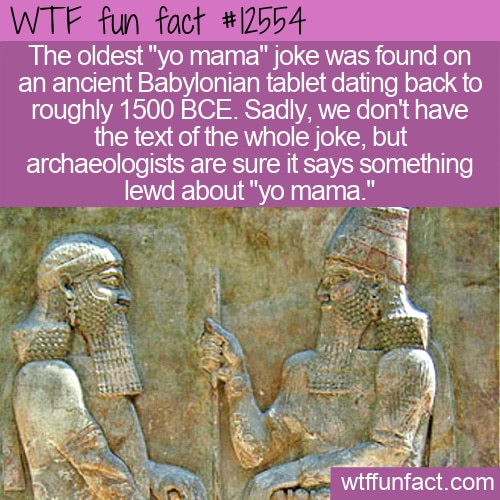 Ancient Babylonians, they’re just like us! Ok, maybe not exactly, but it turns out they liked a good joke and even managed to record some on clay tablets. In 1976, archaeologist J.J. van Dijk found one such tablet in Iraq, and it contained a significant discovery – the first recorded “yo mama” joke.

Judging by the handwriting, van Dijk believes it was a student’s writing (which makes sense – but imagine having to sneak a clay tablet behind your back to pass notes in class!). The student inscribed 6 “riddles” on the tablet, though pieces were broken off.

Sadly, the jokes aren’t funny today, but it’s not surprising that you lose a little something in translation over 3500 years. What we do find amusing is that the 6th joke is a lewd joke about moms.

The rest don’t make much sense. For example:

In your mouth and your teeth, constantly stared at you, the measuring vessel of your lord. What is it? Beer.

See? Not funny. And neither is this one, although it gives us some indication that people have always enjoyed insulting politicians as well:

He gouged out the eye. It is not the fate of a dead man. He cut the throat: A dead man. Who is it?
A governor.

Now, the moment you’ve been waiting for, the actual “joke” (or at least the part that’s left):

…of your mother is by the one who has intercourse with her.
What/who is it?

Sadly, there’s no punchline left on the tablet. But instead of being disappointed, we’re just amused that insulting mothers has been the go-to insult for so very long. Apparently, it’s something we’re all very sensitive about. –  WTF fun fact

Source: “3,500-Year-Old Jokes Have Something to Say About Yo Mama” — Discover Magazine