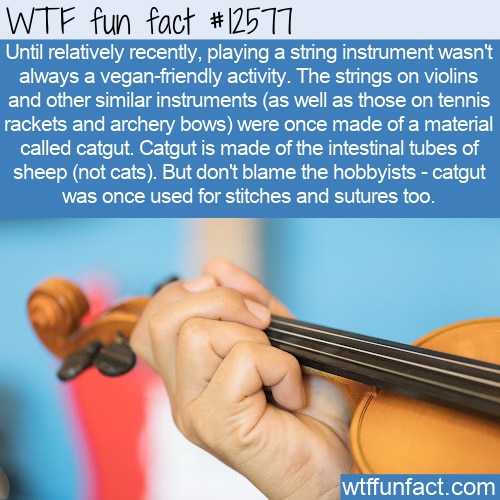 While it may sound like many cats were harmed in the making of music, strings were once may from the entrails of animals (just probably not cats). The practice goes all the way back to Greek mythology (but later, was anything but a myth).

The Greek god Hermes was said to have strung his lyre with cow entrails. And in mythological fashion, he stole those cows from his brother Apollo who he then lulled into blissful acquiescence with his playing (to the point that Apollo gave him his entire herd).

Meanwhile (or, probably, prior), in Egypt, instruments strings were being strung with a material called catgut. The Egyptians loved their cats so much it’s unlikely they used cats (and that catgut is more than a bad translation), but the name stuck. And so did using animal intestines for string, especially later on for violins. Much later, a similar method of creating string from intestines was used for tennis rackets.

According to Encyclopedia Britannica, “catgut is tough cord made from the intestines of certain animals, particularly sheep, and used for surgical ligatures and sutures, for the strings of violins and related instruments, and for the strings of tennis rackets and archery bows.”

They continue with a little history lesson:

“The ancient Egyptians and Babylonians and the later Greeks and Romans used the intestines of herbivorous animals for much the same purposes. The origin of the term catgut is obscure; it is not known if the intestines of cats were ever put to such uses.”

Then some gruesome detail that animal lovers should probably skip:

“The intestinal tubes (called runners) of sheep are washed, cut in ribbons, and scraped free of mucous membrane and circular muscle tissue. The ribbons are placed in an alkaline bath for several hours and then stretched on frames. While still moist they are removed, sorted by size, and twisted into cords of varying thickness. A smoothing and polishing operation completes the process.“

Professional string players can still buy catgut strings and they have a lot of influence over sound quality. But the pros can “go vegan” with their strings, using ones with a synthetic core that sounds much like catgut strings and are also longer-lasting. – WTF fun facts