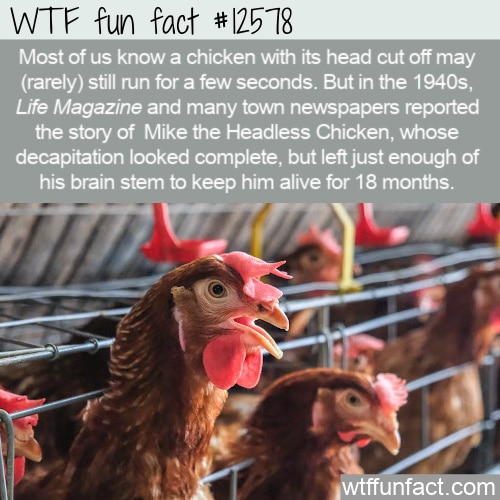 It’s hard – and gross – to think about, but the phrase “like a chicken with its head cut off” originates in a biological oddity of chickens.

You see, you can decapitate a chicken and it will continue to run. They aren’t zombies (because they’re not actually dead yet), it’s just that the animal’s spinal cord circuits still hold residual oxygen. It’s kind of a sick biological joke that the most decapitated animal has this odd feature if you think about it.

The circuits that still have oxygen to operate no longer have a brain to control them, so the spinal cord’s signals go to the legs, causing the chicken to run (typically for just a few seconds).

This is pretty rare since chickens are typically laying down when this happens, but it has certainly happened.

Now, Miracle Mike the Headless Chicken (as he was dubbed by Life Magazine in the 1940s) is a different story. Poor Mike’s owner left a tiny part of his brain stem intact with a messy chop.

On September 10, 1945, Lloyd Olsen was beheading chickens on his farm, and got a runner, but was surprised to see that he didn’t keel over immediately.

Olsen’s great-grandson, Troy Waters, told the BBC years later that his grandparents put the chicken on the screen porch for the night and were shocked to wake up and see “The damn thing was still alive,” according to Waters.

But this isn’t some sketchy legend. Headless Mike toured the country, drawing slack-jawed audiences at carnivals. It was photographed and recorded by the news in various towns and in Life Magazine.

The family had their share of interlopers who insisted on coming to see Mike but also got plenty of hate mail for not just putting him out of his (or perhaps just their) misery. – WTF fun facts

Source: How Mike the Chicken Survived Without a Head — Encyclopedia Brittanica