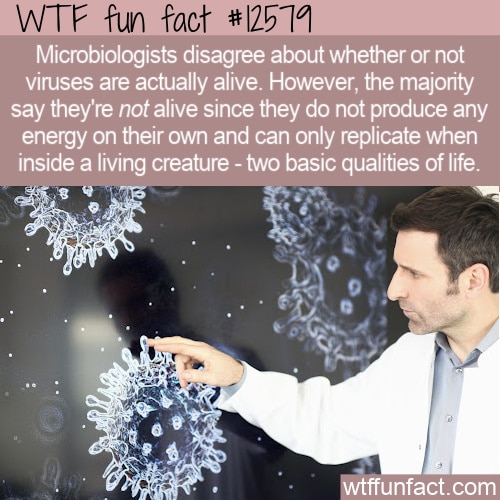 There’s really not that much disagreement in the scientific community – in fact, what constitutes being “alive” is more of a philosophical question. But at some point, it’s both helpful and fascinating to think about what really counts as “being alive.”

In many ways, viruses simply don’t make the cut, even though we talk about them as if they were alive. But that’s because we tend to use metaphors of living things to describe them.

Why not? Well, here are a few reasons:
– They cannot carry out any metabolic processes on their own (generally the definition of being alive)
– They cannot reproduce on their own, only replicate within a host cell.
– They don’t have ribosomes (in fact, they don’t even have cells)
– They cannot produce energy or control the environment in which they exist (only replicate in it).
– They cannot independently form proteins from messenger RNA
– They’re just so darn small (which, to be fair, is not a big part of the argument but something to consider).

In the end, they are just a jumble of protein and RNA that needs a spark of life from somewhere else to do anything at all.

Of course, there are some arguments to the contrary. Those who believe viruses should be considered living things point out the following:
– They have genomes
– They can evolve
– Under the right conditions, they do have the ability to reproduce (even if it’s not on their own)

So perhaps viruses are in between somewhere, only being alive when they can reproduce. That’s something to consider, but only for fun really, since the answer won’t help us solve our viral issues. – WTF fun facts

Source: “Are Viruses Alive?” — The University of Texas at Austin Biodiversity Center