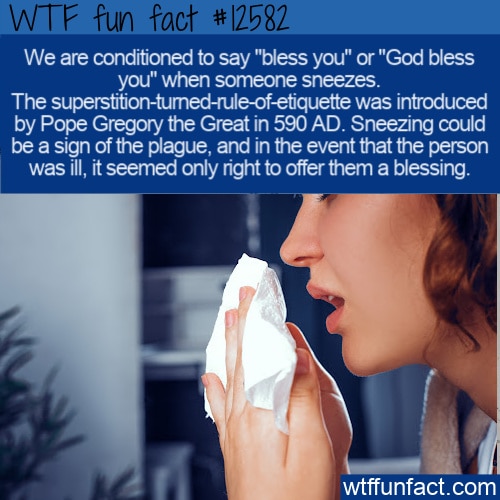 When someone sneezes, it seems rude not to acknowledge it in some way. In fact, saying “bless you” or “God bless you” has become a part of modern etiquette.

But where did this come from?

But it’s likely that the origin of “God bless you” goes back to 590 AD when a plague was ravaging Europe. Sneezing was often the first sign that someone was ill (and while they didn’t realize it at the time, it was also the way the plague spread). In order to bless the would of those who may get deathly ill, Pope Gregory the Great commanded that sneezing people be given a quick blessing.

While “God bless you” and “bless you” go back to the 6th century, the acknowledgment of a sneeze goes back even further – by hundreds of years. Roman author Pliny the Elder wrote in his 77 AD Natural History:

“Why is it that we salute a person when he sneezes, an observation which Tiberius Caesar, they say, the most unsociable of men, as we all know, used to exact, when riding in his chariot even?”

The superstition predates the pope, but Pliny offers no explanation as to why the sneeze was acknowledged.

Of course, there are secular ways of acknowledging a sneeze as well. Those who don’t believe in disembodied souls can keep it polite with a quick “gesundheit.”

Source: “Why We Feel Compelled to Say ‘Bless You’ When Someone Sneezes” — The New York Times