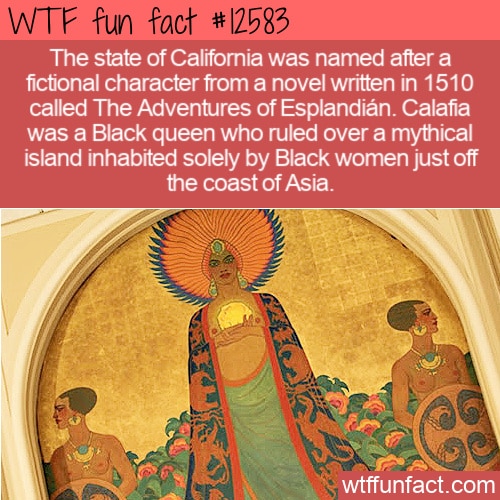 California is named after a 16th-century Black Queen of an island of women. The only catch is that she’s fictional.

Real or not, she’s still the inspiration behind the state’s name.

Calafia was also a fierce queen with quite an arsenal – armor made of fish bones, weapons made of gold, and an army of griffins (because, hey, why not?).

Needless to say, many people are surprised by this origin story. At the very least, it was rare for a man during the Renaissance to write in such a triumphant way about a woman, much less a Black woman. There is no sense of racial inferiority (which was a common trope) in her story.

So how did an American state come to be named after a mythical character?

Well, the novel was so famous in Spain that when conquistadors arrived on the tip of what is now the Baja Peninsula, they thought they had found the mythical island of California. So that’s what they called the whole area.

And while the name stuck, Calafia has been largely forgotten until recently.

An excerpt from the book reads:

“Now I wish you to know about the strangest thing ever found anywhere in written texts or in human memory. […] I tell you that on the right-hand side of the Indies there was an island called California, which was very close to the region of the Earthly Paradise. This island was inhabited by black women, and there were no males among them at all, for their life style was similar to that of the Amazons. The island was made up of the wildest cliffs and the sharpest precipices found anywhere in the world. These women had energetic bodies and courageous, ardent hearts, and they were very strong. Their armor was made entirely out of gold—which was the only metal found on the island—as were the trappings on the fierce beasts that they rode once they were tamed. They lived in very well-designed caves. They had many ships they used to sail forth on their raiding expeditions and in which they carried away the men they seized and whom they killed in a way about which you will soon hear. On occasion, they kept the peace with their male opponents, and the females and the males mixed with each other with complete safety, and they had carnal relations, from which unions it follows that many of the women became pregnant. If they bore a female, they kept her, but if they bore a male, he was immediately killed. The reason for this, inasmuch as it is known, is that, according to their thinking, they were set on reducing the number of males to so small a group that the Amazons could easily rule over them and all their lands; therefore, they kept only those few men whom they realized they needed for their race not to die out.“