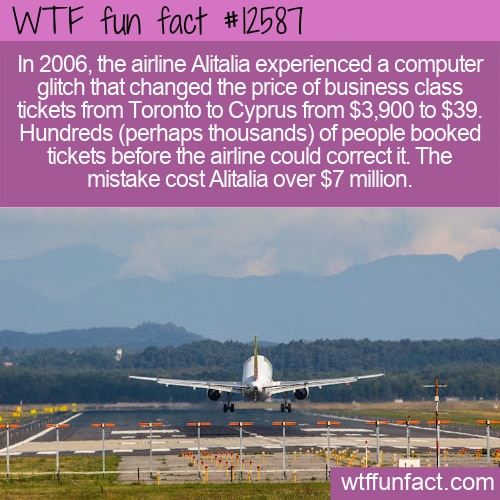 In what may be one of the most expensive typos in history, in April of 2006, Alitalia had the price of their business class flight from Toronto to Cyprus (an island nation in the Mediterranean) deeply discounted. The regular cost was $3,900, but a glitch resulted in the price losing two zeros. Tickets were sold for just $39 – for a 12-15 hour flight! (And that’s just in Canadian dollars – it was $33 in US dollars. Then again, once you add taxes and fees, it was closer to $200.)

Word spread quickly on the website FlyerTalk before Alitalia could make any changes and while they didn’t release the specifics, guesses as to the number of tickets sold range from hundreds to over 2000.

The price was active for around 12 hours, and you better believe that Alitalia tried not to honor the price at first. And purchasers had the angry reaction you’d imagine. In fact, things got so heated that Alitalia ended up honoring the tickets that were officially confirmed. (People who bought through Orbitz and other brokers were largely out of luck.)

The lucky buyers who were given ticket confirmation numbers upon purchase took their trips, costing Alitalia around $7 million.

CBC News interviewed one of the lucky travelers shortly afterward, Donnie Bowers of New Haven. “I didn’t even know where Cyprus was,” he said.”I looked at the regular price, and I thought, wow, this is something to really get involved in.”

They reported that 509 people made purchases, though other sources report higher numbers.

“Why not roll the dice and see what happens?” Bowers said as he prepared for his October 2006 trip. – WTF fun facts