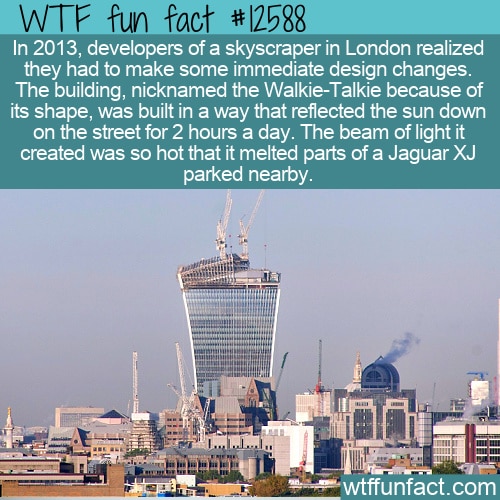 In 2013, a 38-story skyscraper needed a bit of a redesign during construction. Located at 20 Fenchurch Street in London, the building is nicknamed the “Walkie-Talkie” because of its shape. The building has an interesting top-heavy shape.

The building cost around £200 million and was designed by architect Rafael Viñoly. But it wasn’t very popular. In fact, in 2015, the Carbuncle Group named it the worst new building in the UK. But they weren’t the people who were most upset.

It turns out that on those rare sunny London days, the building could become a giant magnifying glass.

For 2 hours a day, the sun shone just right so that the building acted like a concave mirror, beaming that light down onto the streets. (In this magnifying glass metaphor, that makes humans the ants.)

Developers only realized that it was creating temperatures up to 243 degrees F at ground level in the summer of 2013 when a beam six times brighter than direct sunlight started melting a car – a Jaguar XJ, to be exact. The owner, Martin Lindsay, told the BBC that he only realized what happened when he saw a photographer taking photos of the vehicle and asked about it. He recalled the moment:

“The photographer asked me, ‘have you seen that car? The owner won’t be happy.’

The wing mirror, panels, and Jaguar badge all melted.

“It could be dangerous. Imagine if the sun reflected on the wrong part of the body. On the windscreen, there was a note from the construction company saying, ‘your car’s buckled; could you give us a call?'” Lindsay said.

A reporter named Jim Waterson even managed to fry an egg in a pan on the sidewalk.

After that, the building got some new nicknames – “Walkie-Scorchie” and “Fryscraper,” for example.

Of course, an immediate and permanent solution needed to be found, so an awning was installed on the south side of the building to keep it from inadvertently incinerating Londoners and their pricey vehicles.

The same architect, Viñoly, also designed a building in Las Vegas with a similar problem and its windows needed to be coated in non-reflective film.

Viñoly blamed himself, but also the fact that he didn’t realize it was ever that sunny or warm in London. Meanwhile, the Jaguar owner got his repairs paid for by the developers.