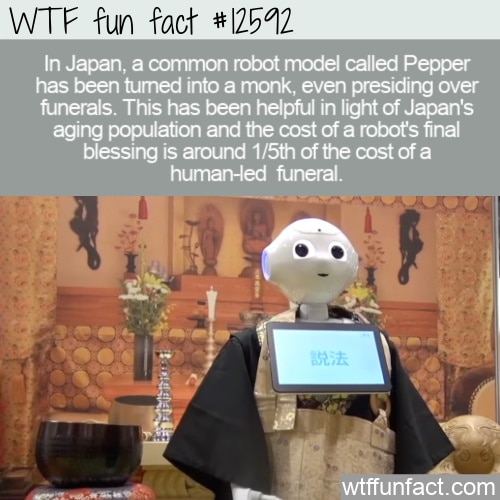 Softbank’s former line of Pepper robots took on many tasks in Japan, including duties in hospitals, retail stores, and even Buddhist temples. Pepper was even programmed to become a stand-in for a Buddhist monk, news outlets reported in 2017.

While the robot monks can deliver blessings and beat a drum, their real purpose is to preside over funeral services in Japan, which has a significantly increasing elderly population.

The robot funerals not only pick up some slack when there aren’t enough human monks to go around, but they’re economical as well. A robot funeral cost about 1/5 of what a regular one would

It’s a question for the ethicists and theologians.

Another interesting fact is that human Buddhist monks have shown the same respect for robots as well, presiding over ceremonial funerals for obsolete robotic dogs in Japan.