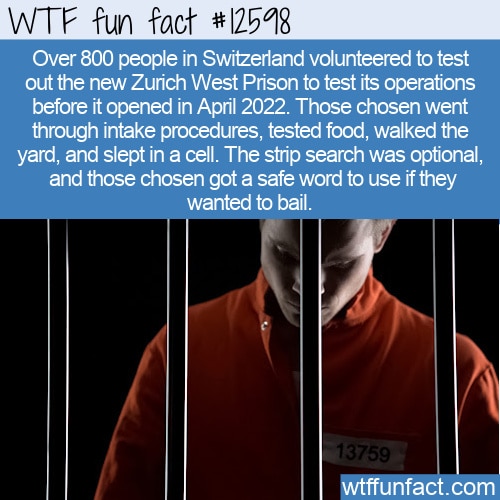 Zurich West Prison is designed to house no more than 241 people awaiting trial in Switzerland. Prison isn’t a fun place in any country, but that didn’t stop people from lining up to give the place a test run earlier this year. The prison is accepting volunteers over the age of 18 who live or work in Zurich.

As of February, over 832 people had applied to spend a couple of nights testing the facility in April 2022. What can we say, people are willing to try just about anything!

But they won’t be Instagramming the experience – there are no phones allowed. So, you won’t be able to see their prison meals, while they’ll be able to choose from a list of vegetarian, halal, or meat-based options.

Oh, and get this – they’ll also be able to opt-in to a strip search! (We’d pass, but that’s just us.) Of course, as volunteers, they’ll have the option of leaving at any time.

Switzerland’s prisons had come under scrutiny for their poor conditions, so Zurich West Prison wants to iron out any kinks beforehand. They aren’t prepping it to be a luxury stay, but they want to get a sense of how the prison operates with people in it before those people are those who have been charged with a crime.

According to an article in Bloomberg:

“What else do we know about the experience volunteers should expect? For starters, they won’t pay anything, and they also shouldn’t expect to get paid for their time in jail. Daily life will include going through intake procedures, testing food, walking the yard, and sleeping in a cell. Cellphones and other electronic devices must be left at the door when checking in, and every volunteer will need a security clearance. To obtain this clearance, participants must go through a security checkpoint similar to airport TSA. And as for strip searches? According to officials, those are voluntary. (Whew!)

During the authentic incarceration experience, volunteers will receive safe words. That way, if things spiral out of control, they can let authorities know ASAP. The same goes for those who get cold feet at any point during the test run. In return, the experience will let officials of the prison system test the new facility’s capacity, operations, and services. It will also give correctional officers a chance to communicate and cooperate with authorities like prosecutors and law enforcement.”