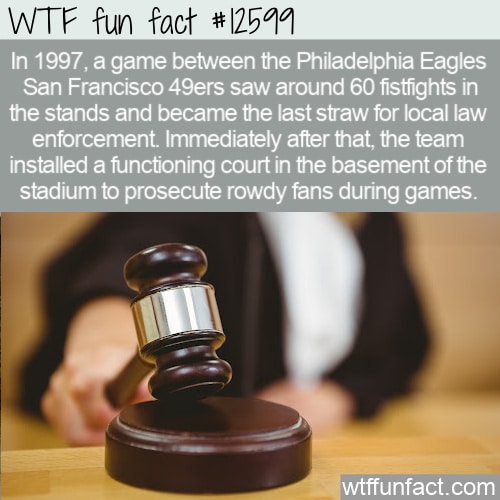 Philadelphia fans have a reputation for being…well, let’s say rowdy. For example, they’re the fans who booed Santa Claus and pelted him with snowballs. In fact, in 1986, the Eagles stadium stopped selling beer at halftime in the hopes of improving fan behavior. But it clearly didn’t do the job because, in 1997, the Eagles installed a courtroom and jail at Veterans Stadium.

During a Monday Night Football game that year, the Eagles played the 49ers in a matchup that somehow sparked around 60 fistfights in the stands, along with some yahoo setting off a flare gun. Enough was enough. Families claimed to be afraid to take their children to games. So, the next time fans returned to the stadium, Eagles Court was in order.

On opening day, 20 fans were brought in front of Justice Seamus P. McCaffery.

But here’s another fun fact: It turns out Philly fans weren’t really the problem.

“Eagles Court was a lot of fun and it served a purpose. One of the interesting facts that came out of Eagles Court was that 95 percent of the people arrested were not from Philadelphia. But Philadelphia was getting broad-brushed as the city with horrible, horrible fans.”

So, apparently, Philly isn’t necessarily home to rowdy fans, but it encouraged rowdiness in people somehow.

For the most part, the court existed to bounce and/or fine people who got out of hand. Anyone who had committed a legit crime was handed over to the local police.

Eagles security and Philadelphia police had cited or arrested fans in the past, but most of them never showed up to their court dates weeks or months later, and their crimes weren’t serious enough for the police to track them down again. Eagles court made sure they were fined on the spot (or assigned community service).

But one of the problems with Eagles court is that it virtually forced people to plead guilty on the spot to avoid being arrested for real. It’s unlikely that everyone was sober enough to understand what was happening.

Some media outlets report that the court was only housed in the stadium in 1997 and was transferred out and into an actual court by 1998, while others say it was in the stadium for its whole (short) life, from 1997 to 2003. When the Vet was replaced by Lincoln Financial Field, there was also a 4-cell jail inside, but that only lasted two years. – WTF fun facts