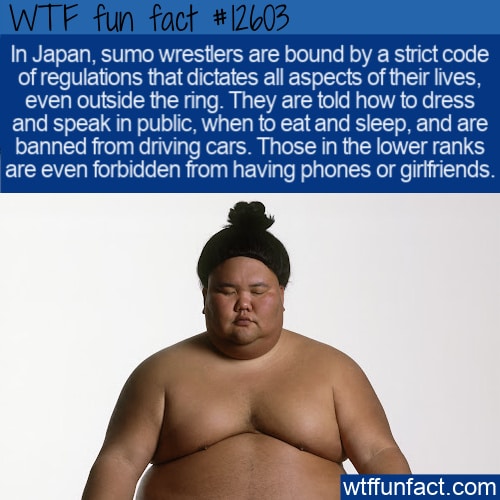 Sumo is an ancient Japanese sport born out of centuries-old temple rituals in the Shinto religion. It is also Japan’s national sport (although many successful wrestlers have come from Mongolia more recently).

Sumo training takes place in Japan only, and those accepted into training are assigned to one house, or “stables,” where they spend their entire careers (you cannot transfer to another). The “stable masters” are former wrestlers who oversee their training – and just about every other aspect of their lives. For example, no women are allowed in the stables, so marriage is atypical, and those who have not reached level 2 in the skill rankings are barred from having girlfriends. Sumo wrestlers are also not allowed to drive a car – although many people point out that their weight often makes it physically impossible for them to reach the wheel anyway because of the size of their stomachs.

But life as a sumo wrestler is not all eating and pushing each other around. Sadly, it’s a scandal-ridden sport where beatings are common to toughen up young men so that they feel less and less pain over time.

Life is incredibly strict, and many rules are dictated by tradition, such as how to dress, wear their hair, and address people in public. Because of their polite and soft-spoken nature, many citizens often bow to sumo wrestlers on the street as a sign of respect for their discipline.

Some have called sumo wrestling a dying art in Japan, and many of us know that when this kind of thing happens, the organizations overseeing a tradition try to hold on tighter to their old ways rather than adapt. More recent stories on the sumo world point out its secretive nature, part of which seems designed to cover up the violence that goes on inside.

Mark Buckton, a sumo expert and former commentator and columnist for Japan Times, told the BBC about a typical day:

“They do eat a lot. But what they do, which is crucial to them is, as soon as they’ve eaten, they go to sleep. They don’t eat anything for breakfast – they do all the training in the morning. They eat their lunch – they would have what you would have, maybe a bit more. But they would just eat it with large volumes of rice. Crucially they will then go to bed. They won’t wake up till mid-afternoon. Then they’ll eat again in the evening – they’ll eat a lot. And then they’ll go to bed quite early, because they’ll be up at 5, 6 o’clock in the morning training.”

While there are roughly 650 fighters, only about 60 are in the tier that gets paid. Everyone else trains and fights without financial compensation.

Things are more lucrative and lenient for the top-level wrestlers – they can marry and live outside the stable. But if they are injured and begin to lose and drop down to a lower tier, they must leave their wives and children and return to the stable!

Buckton also described the brutal conditions for fighters who do not meet the stable master’s standards:

“Oh, they are horrible. Before the boy was killed in 2007, there were regular beatings. You’d see guys with welts on their backs and on the backs of their legs, for not trying hard enough.”

Even champions recall the “kawaigari” or “doting” they experienced – violent beatings that can last as long as 45 minutes. According to Buckton:

“There is remarkable consistency in how the training, and the punishments, have been applied across the different stables and over the decades. This also means that when Harumafuji-style incidents happen, you don’t talk about them for the sake of preserving the group.”

It’s worth remembering when Westerners laugh off sumo wrestling. And it sounds like it’s time for things to change. – WTF fun facts