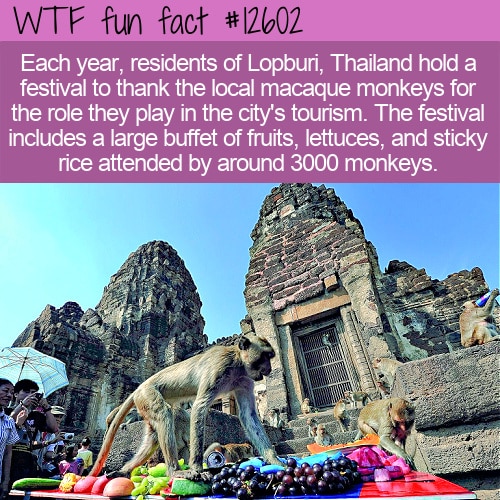 Lopburi, Thailand, is the kind of place that no one needs to be convinced to visit. It’s one of the country’s oldest cities, holds the oldest ruins, and is just generally stunning to look at overall. The only issue for most people is that it’s a little hard to get there. And what usually seals the deal is the fact that long-tailed macaque monkeys roam the streets and serve as entertainment.

In order to thank the monkeys, the residents of Lopburi hold an annual banquet for them at the site of a 13th-century temple known to house many macaques.

The macaques probably don’t care much about the dancers and other forms of entertainment on offer. Like most of us primates, they’re there for the food. And residents deliver in the form of piles of delicious fruits, vegetables, and sticky rice.

The locals believe that celebrating the monkeys brings them good luck and more tourists. But we imagine it’s also pretty fun to watch since monkeys go a little wild around piles of food. We’ve always wanted to see a monkey food fight, and the festival reportedly has plenty.

The festival itself draws tourists, but it may not be the best time to go since the macaques are pretty riled up. If you’ve ever been in a place where monkeys roam the streets you know they can be mischievous little thieves. They like to snatch phones, sunglasses, and purses, and there’s not much you can do once a monkey has your stuff.

If you’re willing to risk it anyway, the festival typically occurs at the end of November, and Lopburi is about a 3-hour drive from Bangkok. And there are food stands for the human attendees because you do NOT want to try and take a monkey’s feast. – WTF fun facts

Source: “Everything You Need To Know About The Lopburi Monkey Festival” — Culture Trip