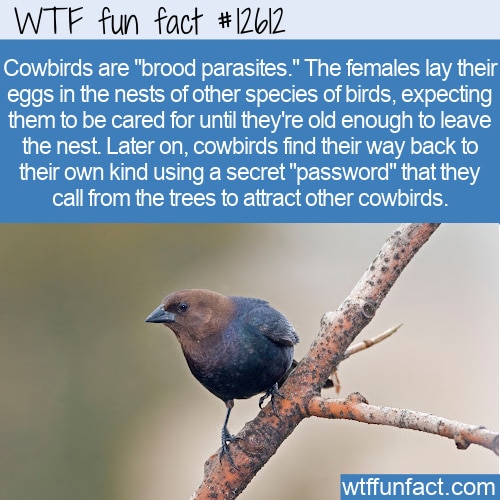 Cowbirds (Molothrus ater) have an interesting way of parenting.

Females (known as “brood parasites”) use all their energy to produce eggs and can even lay around three dozen each summer. It seems like a lot of babies, right? But they’d never know because they abandon them all to whatever feathery foster parents they can find. They lay their eggs in the nest of other birds and expect those birds to raise their young. They’ll even lay their eggs in a nest with other chicks already in it and expect the resident birds to evict their own young in favor of the newcomers!

Even more interesting is that they don’t choose other cowbirds – the babies are raised by completely different species of birds. There are at least 220 other species of bird that could find cowbird eggs in their nest one day, but individual females tend to choose one species with which to leave all of their eggs.

Cowbirds have been a challenge for scientists to understand because it’s hard to follow and get to know birds that don’t build nests. But we’ve had more luck in recent years as their habitats have become smaller, and they’ve moved closer to humans (although that’s not really a good thing for the birds).

So, you may wonder how cowbirds learn to become cowbirds if they are raised by other species. And that’s where the really interesting fact comes in.

Cowbirds eventually find their own kind and spend the rest of their lives associating with other cowbirds. They reunite with their species as juveniles, even though there’s no reason they should have the skills to recognize that they aren’t like their foster parents. (Bird brains aren’t that big.)

So how do cowbirds come to recognize one another? They have a password or “secret handshake” deal going on. Technically, it’s a very specialized chatter call. No matter their age, they can take to the trees, make their calls, and other cowbirds will come and find them. – WTF fun facts