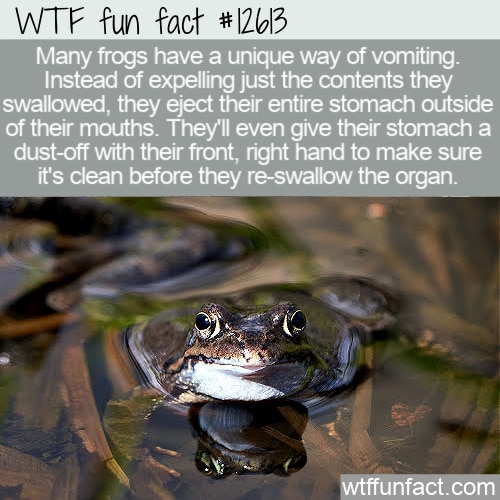 When we saw a webpage titled “Frog Vomit: Everything There is to Know,” we knew there would be something great to share with you. And by “great,” we mean we hope your stomach has already committed to holding down your breakfast because we’re going to talk about barf. (Emetophobics – that is, people who have a fear of vomit – turn back now.)

Ok, so most frogs have a unique way of tossing their cookies, so to speak. The little creatures can’t just hurl the way the rest of us do.

When we vomit, it’s because of signals in our brain that contract all of our major muscle groups – diaphragm, chest wall, abdominal muscles – put so much pressure on our stomachs that the contents are then forced up through our throats and through our mouths. You probably know the feeling. But next time you have to heave, just be glad your stomach is staying where it is because that’s not the case for most frogs.

No matter what you think of vomiting, we must be able to do it because it can keep us safe from anything toxic being absorbed into our bloodstream and killing us. So frogs are lucky, too, because they CAN vomit. It’s just a bit more of a production.

When frogs puke, they actually see their stomachs outside of their bodies. Of course, it doesn’t freak them out because that’s just how their species rolls. But what we find fascinating is that their stomach can just be out there, all like “hello, world!” and then go back in without much drama.

According to the experts, frogs can even give their stomachs a bit of a dust-off while they’re at it, wiping their bellies clean of whatever might be stuck in there causing a problem. Seriously, they’ll use their little froggy hands to wipe it right off, using the front, right hand (obvs). (Ok, we also didn’t know this, but the front, right hand of a frog is the closest to their expelled stomach due to the way the stomach is positioned in their bodies.)

If you’re wondering what happens next, it’s all relatively routine after that. They just pick their expelled organ up, plop it back in their mouths, and swallow it. After all, it’s the only way back in!

And there’s no chance of them biting it either since frog teeth (which, we’ll admit, we never really thought about) are only used to keep food in, not for chewing.

Frogs vomit for many of the same reasons we do – because there’s something in their stomach that is toxic, inedible, or simply too big (buffet-lovers, you know what we mean). Frogs can even vomit due to motion sickness!

Now, if something very unnatural happens in their environments and they cannot re-swallow their stomach for some reason, the frogs will suffocate and die. So if you see the little guys (and gals) in a rough situation, give them a minute to swallow before you interfere.

If you got this far, we know what you’re thinking. So there’s a video below where you can see a frog barf its stomach out. You’re welcome. (Oh, and if the pedant in you wants to point out that this is a toad, please note the fun fact that a toad is a type of a frog and that there is no official scientific distinction between the two creatures.) – WTF fun facts

Source: “Frog Vomit: Everything There is to Know” — Toads N Frogs