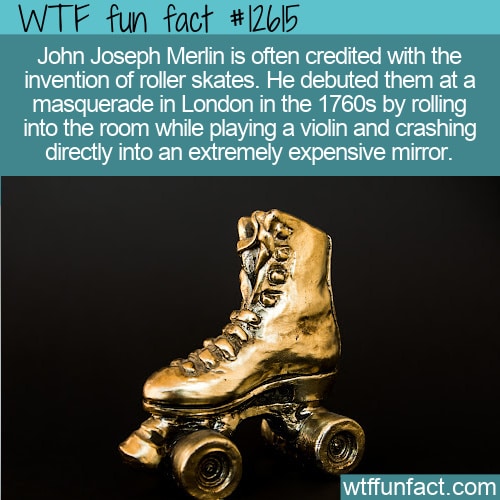 For most intents and purposes, the idea of the roller skate can be traced all the way back to the 1760s and a man named John Joseph Merlin. But it may also be the case that he was just the first to make a spectacle of himself wearing them.

Merlin was a Belgian inventor working in Paris and London in the 18th century. He made clocks, mathematical devices, and even musical instruments. But his creativity didn’t stop there. He built wheelchairs and robots and even created his own museum dedicated to his designs in 1800, Merlin’s Mechanical Museum.

But if you’ve heard of Joseph Merlin before, it’s likely from an anecdote that he debuted the rollerskate at a festive gathering at a rather grand salon. Not content to just roll in, he rolled in playing the violin…because, well, why not?

The problem wasn’t that he had a penchant for the dramatic, it was that he didn’t seem to have practiced his entrance beforehand. At least not enough to recognize that he’d need a way to stop rolling. There were no brakes on the skates.

As the story goes, Merlin rolled in, got everyone’s attention, and then immediately crashed into a mirror. Of course, it’s not like we have video proof, but you can find the story in Thomas Busby’s 1805 Concert Room and Orchestra Anecdotes:

“One of his ingenious novelties was a pair of skaites contrived to run on wheels. Supplied with these and a violin, he mixed in the motley group of one of Mrs Cowleys’ masquerades at Carlisle House; when not having provided the means of retarding his velocity, or commanding its direction, he impelled himself against a mirror of more than five hundred pounds value, dashed it to atoms, broke his instrument to pieces and wounded himself most severely.”

Perhaps the best takeaway from this is that an inventor should always invent something to stop his invention from hurting people – especially him or herself.

Merlin’s skates appeared to have been in-line skates, however. Encyclopedia Britannica provides a fuller story of the invention of the roller skate:

“The invention of roller skates has been traditionally credited to a Belgian, Joseph Merlin, in the 1760s, although there are many reports of wheels attached to ice skates and shoes in the early years of that century. Early models were derived from the ice skate and typically had an “in-line” arrangement of wheels (the wheels formed a single straight line along the bottom of the skate). In 1819 M. Petibled of Paris received the first patent for a roller skate. Like previous models, Petibled’s skate had an in-line wheel arrangement, using three wooden or metal wheels. The wheels were connected to a wooden block that in turn could be strapped to a boot. These early roller skates enjoyed limited popularity. The ride was rough, and stopping and turning were nearly impossible. The first practical roller skate was designed in 1863 by James Plimpton of Medford, Massachusetts, who broke from the in-line construction and used two parallel pairs of wheels, one set near the heel of the boot and the other near the front.” – WTF fun facts