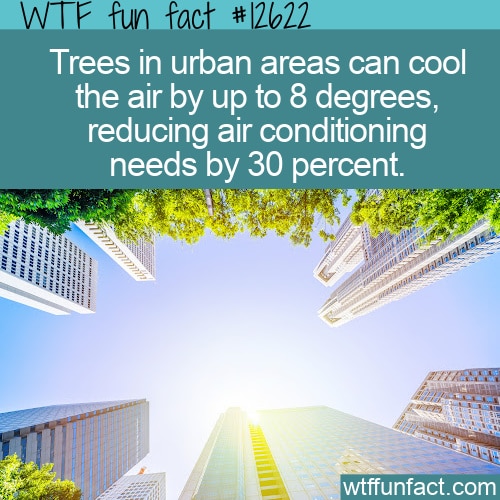 There’s no arguing with the fact that trees keep the planet alive. And we all know they help keep the Earth cool, though we may not know the exact mechanism by which they do it.

But the amount of influence trees can have over the climates in their immediate areas is still pretty stunning.

Even when trees grow in cities (relatively far apart and under conditions that are probably less ideal than, say, a forest), they can have a large cooling impact.

According to the EPA, cities sometimes create “heat islands”:

“An urban heat island (UHI) is an urban area or metropolitan area that is significantly warmer than its surrounding rural areas due to human activities. The temperature difference is usually larger at night than during the day, and is most apparent when winds are weak.”

Tl; dr – Cities are hotter because of all the stuff we do there.

But what’s cool about trees (see what we did there?) is that they can lower both surface and air temperatures. We all know it’s cooler in the shade (sometimes by as much as 20-45 degrees F!), so that’s part of it. But there’s also something called evapotranspiration that plays a role. That’s the method by which water moves from the earth’s surface (the soil) up into the atmosphere. So, later, when we get precipitation, it can cool off our buildings and sidewalks.

Evapotranspiration (along with shading, in most cases) can reduce peak temperatures on a summer day by 2-9 degrees F.

There’s a very long list of the benefits of trees, but we’ll add a few that are less obvious about city trees:

Sometimes trees get in the way, but it’s critical to have them around (or replant them when we need to remove them). – WTF fun facts