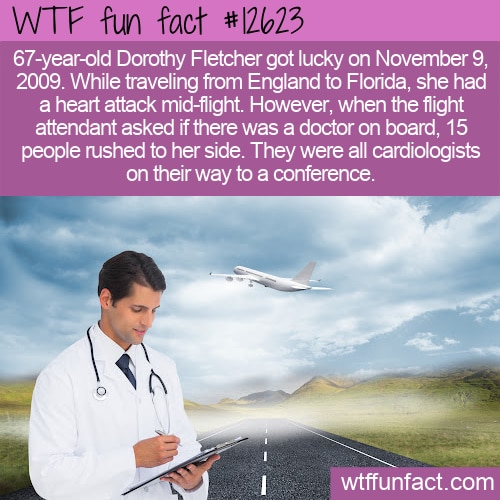 We’re not sure whether to call Dorothy Fletcher lucky or not. After all, she suffered a heart attack in the middle of a transatlantic flight from Manchester to Florida on November 7, 2009. That’s unfortunate. But, on the other hand, there were 15 cardiologists on board when it happened.

When the stewardess asked if there were any doctors on board, the 15 experts volunteered their service.

Well, they didn’t just wait around to be called on, rather the story seems to claim they all ran to her side to try and help. Using an onboard medical kit, they were able to control the heart attack, save her life, and get a drip into her arm.

“I couldn’t believe what happened. All these people came rushing down the aircraft towards me. The doctors were wonderful. They saved my life. My daughter was with me and you can imagine how she felt when all these doctors stood up. I wish I could thank them but I have no idea who they were, other than that they were going to a conference in Orlando.”

Mrs. Fletcher was treated in the intensive care unit at Charlotte Medical Centre and stayed for two days. She had been traveling to attend her daughter’s wedding. And she did make it to the nuptials on time the following week in Lake Berkeley, Kissimmee. – WTF fun facts