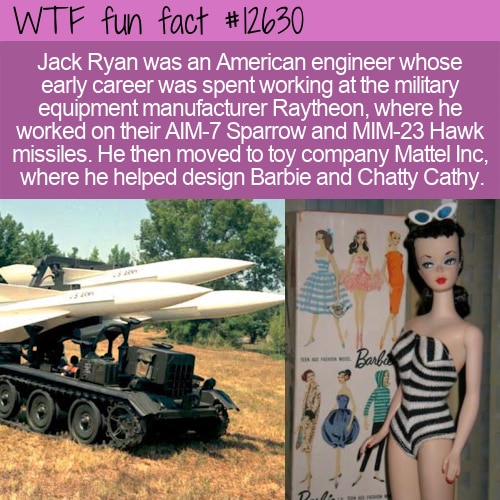 In his relatively short life (he died at just 65), engineer Jack W. Ryan designed and co-designed quite a few things that changed the world. That includes such dissimilar things as Raytheon’s Sparrow and Hawk missiles, Barbie, and Chatty Cathy.

According to a biography and an exposé on Mattel written after his death, he was also surrounded by scandal and just generally not a wholesome guy. That’s hard to put aside since some of that may have influenced his career trajectory, but it’s still the case that he played a significant role in both military technology and the toy company Mattel. Which is kind of weird, right?

As vice president of research and design (and later a consultant) for Mattel Inc., he helped design Hot Wheels as well. But when it came to Barbie, it was his unique engineering that helped seal the deal – he’s the reason she can bend her legs and turn her arms. It is, ahem, probably worth noting that Mattel was sued over the design because Ryan “borrowed” it from a German “adult” doll called Bild-Lilli. He knew he had to make it less provocative, but it does explain a bit about why Barbie might look so…adult.

Of course, let’s not forget that the IDEA for Barbie belongs to Ruth Handler, the president of Mattel. She was the one who came up with the idea of a 3-dimensional life-like doll for kids. She was also once indicted for influencing the company’s stock price too, so let’s just say that toy companies aren’t the best place to let your children hang out. Stick to the toy stores. – WTF fun facts