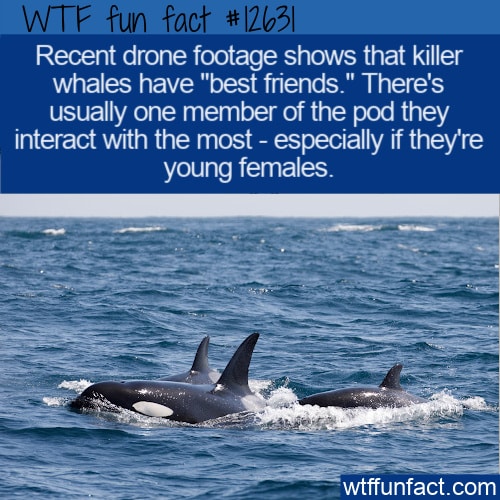 It’s not so easy to monitor giant sea creatures like killer whales close enough to know about their social lives. But thanks to drone footage, we’ve recently learned that killer whales are a lot more social than most people give them credit for.

By tracking a pod of 22 killer whales for ten days, marine researchers noticed patterns in behavior that resembled complex relationships among some pod members that they think relate to the species in general.

While killer whales live their entire lives in the same pod, they’re not equally close to all members. Just like a group of humans, they let relationships come and go over time, getting close to some members, but then growing into other relationships over time.

More specifically, researchers noticed that the whales showed a preference for another specific group member. They would surface together and touch each other more often than they would other pod members.

These behaviors signal a desire to cooperate and be social with one other whale – a “best friend,” if you will. Adding to the hypothesis is the observation that these “besties” tended to be of the same sex and age.

According to an interview by ScienceAlert with behavioral ecologist Darren Croft from the University of Exeter:

“In many species, including humans, physical contact tends to be a soothing, stress-relieving activity that reinforces social connection. We also examined occasions when whales surfaced together – as acting in unison is a sign of social ties in many species.”

Apparently, the older the whale, the more anti-social they tend to be. That’s a behavior mirrored in humans as well. – WTF fun facts