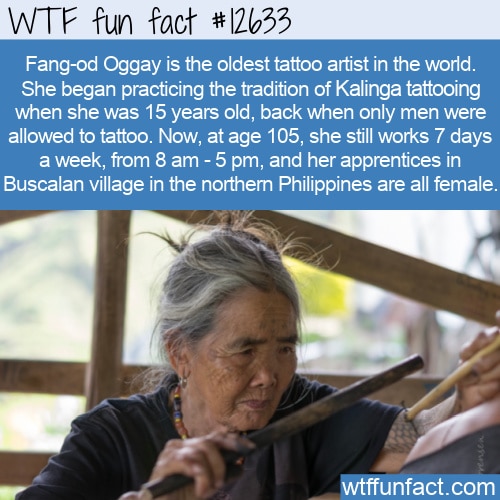 Buscalan Village, Kalinga, is in the north of the Philippines, and despite having no cell or internet service, it’s an incredibly popular tourist destination. That’s because people make pilgrimages of a sort to see a 105-year-old tattoo artist named Fang-od Oggay. She’s been practicing her native province’s tribal tattooing method.

According to Atlas Obscura, “She is known worldwide as a living legend and the last tribal tattoo artist to hold the title of Mambabatok—the name given to traditional tattooists by the Kalinga ethnic group for thousands of years.”

Oggay is the master of the technique, an art that used to belong only to men. But seeing her talent at an early age, her father taught her the technique at age 15, and she’s been tattooing ever since. She’s at the head of a movement to keep the Butbut tribe’s tradition of hand-tap tattooing alive. And all of her apprentices are females.

Oggay uses citrus thorned to prick the skin. They come from either calamansi or a pomelo tree branch and get threaded into a bamboo reed. The ink is made of charcoal and water and wiped onto the thorn, which is tapped into the skin using a 12-inch bamboo hammer.

But the tattoos used to be for Butbut tribal head-hunters and male warriors as a symbol of their bravery. The more tattoos, the more heads you had taken in war, so a warrior’s goal would often be to have their entire bodies tattooed. The last warrior to get such a tattoo got his in 2002. Times have changed.

But Oggay is still tattooing. Head-hunting might not be a socially acceptable behavior anymore, but that doesn’t mean the tattoo art should fade away. But the tradition will be carried on by women.

Atlas Obscura says: “Oggay was the first female tattoo artist in Kalinga. But she may not be the last Mambabatok. Over time there has been a shift, with young women taking up the ancient tradition. Through tattooing, they are economically supporting the whole village.”