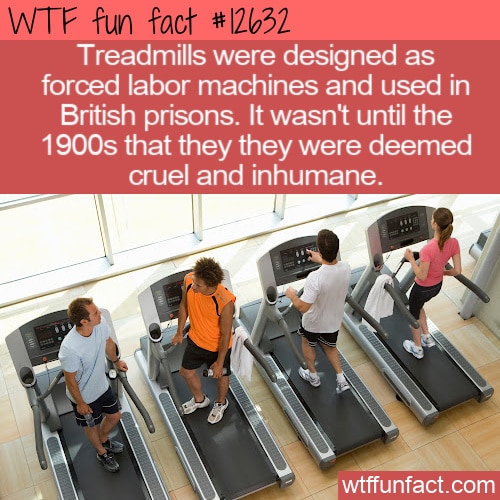 If spending time on the treadmill feels like cruel and unusual punishment, that’s because it was designed to be. Prisoners were supposed to learn from their sweat, and the machines would typically power a mill or a water pump of some sort.

The “treadwheel” was invented by engineer William Cubitt and was first installed in London’s Brixton Prison. Prisoners would press down their feet on steps (sounds more like an elliptical!) that would cause a wheel to turn and ground corn.

Now, maybe you think it wasn’t so bad if you choose to walk on a treadmill today, but not only were there partitions between the (up to 24!) prisoners on the treadmill, but they were put on the machine for hours—ten hours in the summer and 7 in the winter.

When the British began to “reform” their prisons, they were concerned that the poor would use them to get free meals and a place to sleep, so they felt like they needed to deter them. Hence the punishment.

Eventually, the treadmills were no longer used to power machines and were merely an instrument of punishment…or some would (and did) say torture.

By 1842, 109 out of 200 prisons in the UK were making prisoners “work the treadmill.” But eventually, people began to see them for what they were, and by 1901, only 13 remained. Of course, they also exported the idea to America, which had four prison treadmills.

Eventually, prisons converted their work to a factory model, ostensibly to teach prisoners practical skills while incarcerated in the name of rehabilitation.

According to JSTOR Daily:

“It resurfaced in 1913 with a U.S. patent for a “training-machine.” In the 1960s, the American mechanical engineer William Staub created a home fitness machine called the PaceMaster 600. He began manufacturing home treadmills in New Jersey. (He used it often himself, right up until the months before his death at the age of 96.) Now, it’s the top selling piece of exercise equipment in the U.S.” – WTF fun facts

Source: “Treadmills Were Meant to Be Atonement Machines” — JSTOR Daily