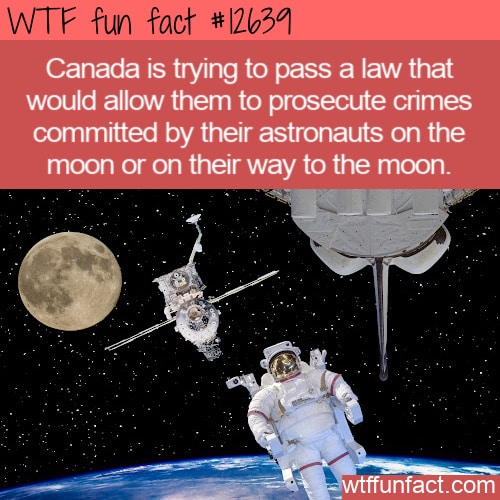 Pretty soon, it may be illegal for Canadian astronauts to go on crime sprees in space.

Now, we’re pretty sure that’s not why Canadians become astronauts in the first place, but apparently, you can never be too careful.

So, what’s this all about? Well, Canada just proposed an amendment to the country’s Criminal Code in their no-doubt riveting 443-page Budget Implementation Act in the House of Commons. It basically states that any crime committed in space by Canadians will be considered to have been committed on Canadian territory and punished accordingly. In other words, if you commit moon murder as a Canadian, you better not come back.

Canada is part of the Lunar Gateway Project, a NASA-backed orbiting space platform. Part of that plan includes a trip to the moon, and apparently, the government wants to make sure Canadians maintain their reputation for being polite even among extraterrestrials.

There are two interesting questions at play here – 1) who controls space justice, and 2) what gives a country the right to say space in their territory for prosecutorial purposes?

If you think space crime is absurd, there have already been accusations that have raised questions (however, no crime actually occurred). In 2019, astronaut Anne McClain was accused by her estranged spouse, Summer Worden, of improperly accessing bank records from the International Space Station. But McClain was later cleared after her spouse admitted to lying.

Still, it made people wonder how we might prosecute crimes in space, where no one technically owns territory (yet) and no one has jurisdiction.

Now, we already have some guidelines for international space law, believe it or not. According to CBC News:

“‘There are five international treaties governing activities in space but the 1967 Outer Space Treaty, ratified by Canada and more than 100 other countries, is the most relevant when it comes to dealing with alleged crimes in space, wrote Danielle Ireland-Piper, an associate professor of constitutional and international law at Australia’s Bond University. ‘As for the question of who prosecutes space crimes, the short answer is that a spacefaring criminal would generally be subject to the law of the country of which they are a citizen, or the country aboard whose registered spacecraft the crime was committed.'”

But things might be different if the astronaut-on-astronaut crime occurs between two different nations. In that case, there might be some disagreement about which country is able to prosecute the space offender. – WTF fun facts

Source: “Crimes on the moon could soon be added to Canada’s Criminal Code” — CBC News