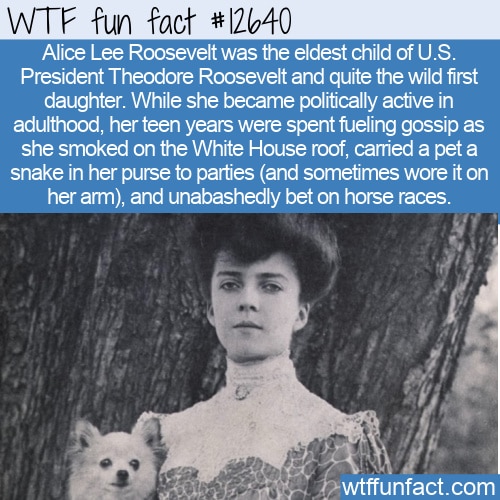 Her mother died just days after she was born, and she was initially raised by her aunt, Anna Roosevelt. But when her father remarried in 1886, she was sent to live with the family and her five half-siblings.

She was intelligent and bold and happy to be in the spotlight as a celebrity first daughter. She made news for such antics as smoking on the White House roof and carrying a pet snake named Emily Spinach in her handbag, sometimes taking her out and wearing the snake around her arm. She also publicly bet on sports races, something ladies of the stature didn’t do at the time.

It appears that her parent wanted to do something about her behavior but felt unable to do so since she was such a darling of the press.

Later in life, she became a political power of her own, marrying a Republican representative from Ohio, but they argued over her support of her father’s Progressive Party politics. However, Alice also wrote a newspaper column condemning some of those, including Rosevelt’s response to The Great Depression. Alice was also vocal in protesting the U.S.’s participation in the League of Nations and had isolationist tendencies – at least up until Pearl Harbor drew the country into WWII.

She was at the center of Washington society for decades after that, hosting the Kennedys, Nixons, and Johnsons.

After having a double mastectomy later in life, she insisted on referring to herself as “Washington’s only topless octogenarian.”

Those who joined her for tea would catch a glimpse of a pillow that read, “If you can’t say something good about someone, sit right here by me.”