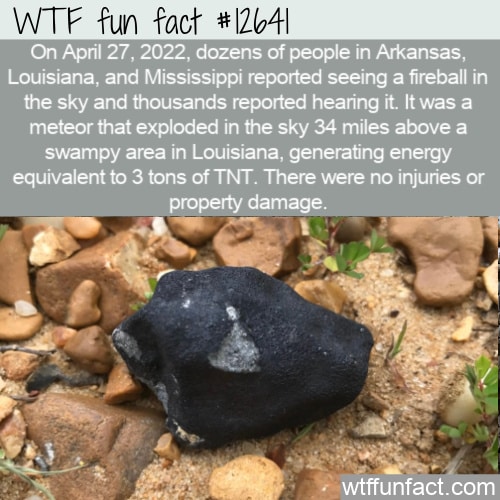 The world didn’t end on April 27, 2022, though we’re confident that a few people thought it might after seeing a giant fireball in the sky headed straight for earth at 8 am.

Around 60 people in Alabama, Mississippi, and Louisiana saw what turned out to be a meteor, but hundreds of people heard the loud boom. That’s because it exploded 34 miles above a swampy area in Louisiana with the power of 3 tons of TNT. Frankly, we would have just gone back to bed after all that.

NASA confirmed the meteor and verified that pieces of it had been recovered on the ground in Mississippi. At first, they estimated its speed at 55,000mph but later amended it to a more modest 35,000mph.

The Mississippi Emergency Management Agency said the event caused no physical injuries or property damage. However, we’re pretty sure there was at least a little bit of existential damage done to anyone who thought they were about to meet the same end as the dinosaurs.

Because the law states that meteorites belong to whoever owns the property they land on, NASA will not disclose the locations of any of the fragments. (We’re pretty sure someone on Facebook will take care of that.)

NASA also reminded people: “We are not meteorite people, as our main focus is protecting spacecraft and astronauts from meteoroids.” So they won’t be identifying or authenticating any other rocks people claim are meteorites. They also confirmed that Mississippi is particularly meteorite-prone, with incidents occurring in 1854, 1910, 1922, and 2012. – WTF fun facts

Source: “Pieces of ‘fireball’ that exploded while zooming over 3 Southern states are being found on ground, NASA says” — CBS News