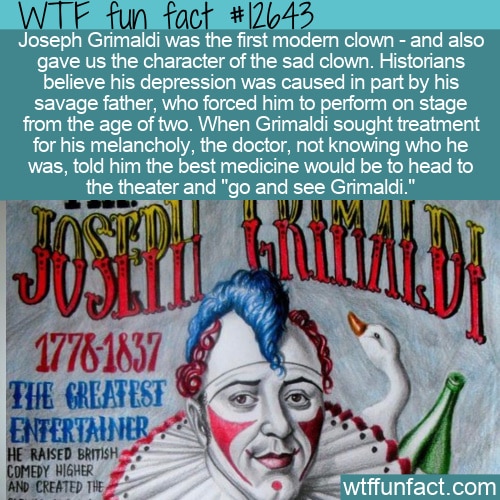 Joseph Grimaldi had a long and illustrious career marked by extreme emotional outbursts. And one of the reasons we know so much about him is because of his well-written biography – by none other than a young newspaper writer named Charles Dickens.

Dickens gave readers some insight into the brutality of Grimaldi’s upbringing, and in particular, his treatment by his father, Guiseppe, a dentist and performer who moved from Italy to England for a career change.

Abusive to all of his children, he capped off his life by demanding that his daughter cut off his head before he was buried in order to receive her inheritance, all because he was terrified of being buried alive.

He wasn’t any more pleasant to his other nine children either, but only Joseph grew up and created the character of the modern clown. While he gave his all on stage, he would often burst into hysterics between acts and pull himself together just in time to entertain during the second act.

When trying to treat his intractable melancholy, he visited a doctor who had an even more depressing prescription: “relaxation and amusement… perhaps sometimes at the theater;—go and see Grimaldi.”