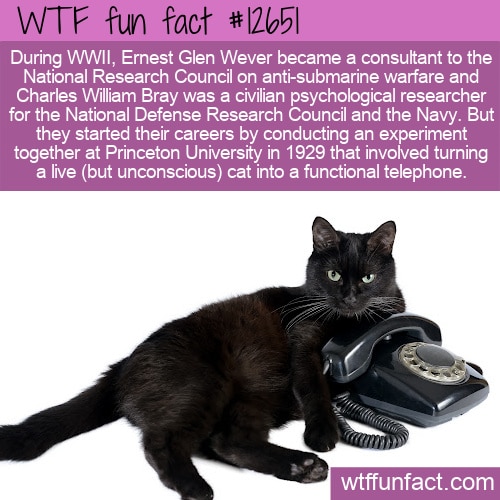 Have you ever wanted to turn a cat into a telephone? We haven’t either. But in 1929, two Princeton University researchers gave it a go anyway. Apparently, they weren’t cat lovers.

Professor Ernest Glen Wever and his research assistant Charles William Bray performed the experiment that involved a live but unconscious (thankfully!) cat in order to see how the auditory nerve perceives sound.

That’s a fancy way of saying they sedated a cat, opened its skull, accessed its auditory nerve, and attached a telephone wire to it. The other end of the wire was connected to a telephone receiver.

While many of us may turn up our noses at the thought of animal research, it has saved and improved many human lives. Bray and Wever weren’t even interested in making a cat into a telephone for any practical purpose (not that we could even think of one anyway). Instead, they were interested in the research methods used to run the tests, which paved the way for more sophisticated research on human hearing and made contributions to devices called cochlear implants that convert sound vibrations into electrical signals in the brain for deaf people.

Despite not caring much about creating a cat phone, the experiment did work, and Bray was able to speak into the cat’s ears while Wever listened through the receiver 50 feet away in a soundproof room.

Wever and Bray received the first Howard Crosby Warren Medal of Society by the Society of Experimental Psychologists in 1936 for the experiment.

Later, both men entered military research. Bray became the Associate Research Director of the U.S. Air Force Human Resources Research and then served on the civilian psychological research team for the National Defense Research Council and the Navy. Wever became a consultant to the National Research Council on anti-submarine warfare.

And cats worldwide likely rejoiced that they found other things to do. – WTF fun facts