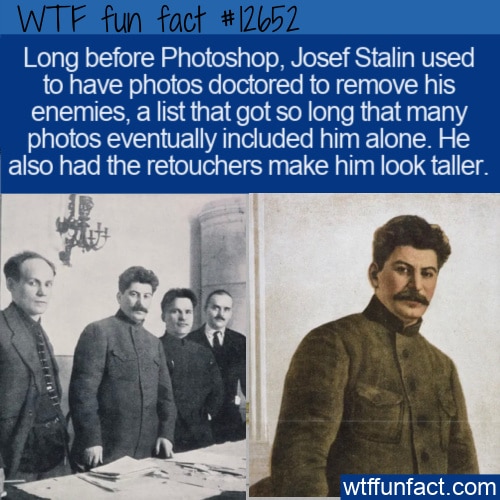 It’s a good thing Stalin didn’t have Instagram, or he would have spent a lot of time updating it.

Josef Stalin’s Great Purge was his way of systematically eradicating members of the Marxism–Leninist party who were in his inner circle when he thought they had betrayed them. And he did eradicate them quite literally (by firing squad).

But he also used a propaganda technique that erased many historical records of them – he had them edited out of photos. In that way, Stalin was a photoshop pro before Photoshop was born.

According to the writers at History.com:

“After consolidating his power in 1929, Stalin declared war on Soviets he considered tainted by their connections to the political movements that had come before him. Beginning in 1934 he wiped out an ever-changing group of political “enemies.” An estimated 750,000 people died during the Great Purge, as it is now known, and more than a million others were banished to remote areas to do hard labor in gulags.”

And of the photos, they noted:

“Stalin used a large group of photo retouchers to cut his enemies out of supposedly documentary photographs. One such erasure was Nikola Yezhov, a secret police official who oversaw Stalin’s purges. For a while Yezhov worked at Stalin’s right hand, interrogating, falsely accusing and ordering the execution of thousands of Communist Party officials. But in 1938, Yezhov fell from Stalin’s favor after being usurped by one of his own deputies. He was denounced, secretly arrested, tried in a secret court, and executed.”

The more enemies Stalin made, the more photos needed to be retouched. In fact, in some group photos, only Stalin himself remains.

Stalin even went so far as to doctor photos to have himself inserted into historical moments. Oh, and he had people make him look taller and more handsome as well. – WTF fun facts