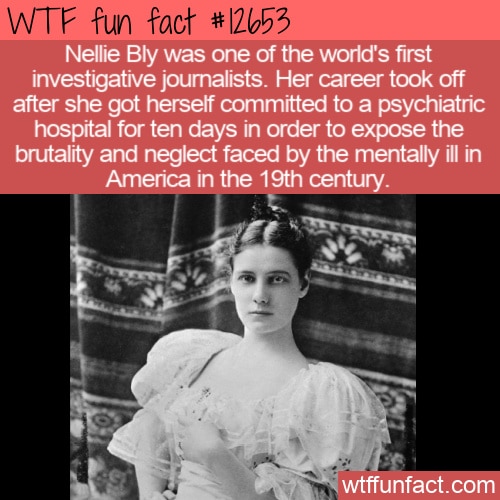 Nellie Bly was one of the first female investigative journalists. The daughter of a county judge, she was born Elizabeth Jane Cochran. But she borrowed the name Nellie Bly from an American minstrel song because women never wrote under their real names.

Bly searched for a job for months in NYC before sneaking into The New York World’s headquarters to pitch a story.

In order to inform Americans about the horrific conditions inside the country’s psychiatric hospitals (called “insane asylums” at the time), she volunteered to become a patient on the condition that The World would send a lawyer to get her out after ten days.

Her riveting account was the beginning of investigative journalism, and her book Ten Days in a Mad-House was widely read and awarded.

But she didn’t rest on her laurels after that. Instead, her next project was to travel around the world in 72 days (in 1889-1890, so there were no airplanes!) with just one bag. Of course, this was designed to challenge Phileas Fogg’s Around the World in 80 Days.

After her successful and highly-publicized trips, the papers called her the “best-known and most widely talked of woman on earth.”

At age 50, she reported from the front lines in Austria during WWI, interviewing soldiers on the battlefield and in the trenches.

While she married a millionaire, she ended up buried in a pauper’s grave after dying of pneumonia at age 57. That’s because she spent all of her time and money helping people out of poverty. In 1978, the New York Press Club funded a small and simple headstone with her name in New York’s Woodlawn Cemetery. However, today, she also has a memorial on Roosevelt Island, the site of the asylum where she did the first investigative work that made her famous. – WTF Fun Facts