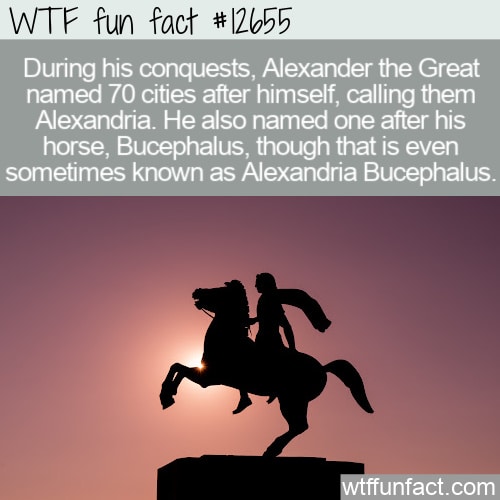 King Alexander the Great spent his entire adult life trying to conquer the world on behalf of Macedonia, and by his side, nearly the entire time was his horse, Bucephalus.

The ancient writer Plutarch wrote much of what we know about the life of Alexander, including the story about how the 12-year-old future king won his noble steed.

A horse dealer tried charging Alexander’s father a very high sum for the horse (to be fair, his father was King Philip II of Macedon). No one had seemed it a good deal since the horse could not be tamed. But young Alexander saw some potential and made a deal with the horse seller – if he could tame it, he could keep it. If not, he would pay the high sum.

Of course, we know where this story goes – Alexander subdued the horse and then rode it into nearly every battle for decades until the horse died during a campaign in India.

As someone who felt he had the right to conquer the world, Alexander left his name all over it, including over 70 cities named Alexandria.

But he loved his horse Bucephalus so much that when it died in 326 BCE, he named a city Bucephala.

The ancient writer Pliny the Elder also wrote about the event:

King Alexander had also a very remarkable horse; it was called Bucephalus, either on account of the fierceness of its aspect, or because it had the figure of a bull’s head marked on its shoulder. It is said, that he was struck with its beauty when he was only a boy, and that it was purchased from the stud of Philonicus, the Pharsalian, for thirteen talents. When it was equipped with the royal trappings, it would suffer no one except Alexander to mount it, although at other times it would allow anyone to do so. A memorable circumstance connected with it in battle is recorded of this horse; it is said that when it was wounded in the attack upon Thebes, it would not allow Alexander to mount any other horse. Many other circumstances, also, of a similar nature, occurred respecting it; so that when it died, the king duly performed its obsequies, and built around its tomb a city, which he named after it” The Natural History of Pliny, Volume 2, translation by John Bostock, Henry Thomas Riley.

Source: “Bucephalus: The Horse of Alexander the Great” — ThoughtCo.