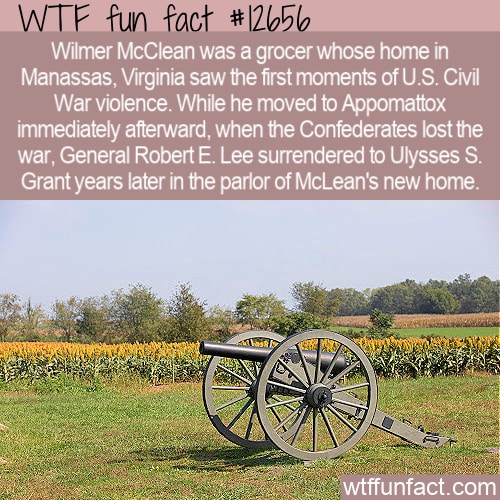 People say Wilmer McLean “was perhaps the only man who ever had the first major pitched battle of a war fought in his front yard and the surrender signed four years later in his parlor.”

It’s a strange fact that few people know about the Civil War – but it all started and ended at one man’s house.

Wilmer McLean was a grocer from Virginia, but his farm was one of the first places to see artillery fire on July 21, 1861, in what would later become known as the First Battle of Bull Run (First Manassas) in Manassas, Prince William County, Virginia. That’s because it was being used as a headquarters for Confederate Brigadier General P. G. T. Beauregard. McLean swiftly regretted getting involved after a cannonball fell through his kitchen.

That’s when McLean took his family to Appomattox, Virginia, hoping to never see violence again (and to headquarter his own business supplying sugar to the Confederate Army in a more strategic location).

While he had long retired from the military himself, the war found him again as the Confederates lost and General Robert E. Lee surrendered to Lieutenant Ulysses S. Grant. All they needed was a safe place to meet. And that’s when McLean got a second knock on his new door on April 9, 1865.

A messenger requested to use his home – his parlor, to be exact – for the surrender. McLean is supposed to have said, “The war began in my front yard and ended in my front parlor.” That’s where Lee surrendered to Grant and effectively ended the U.S. Civil War.

McLean may have seen history twice, but his house got ransacked both times as Army members made off with his furniture, knowing it would be a part of history. However, they handed him money as they did it. For example, Major General Edward Ord paid McLean $40 (equivalent to around $700 today) as he made off with the table on which the document of surrender was signed.

If you want to see what McLean’s house looked like before that event, it has been recreated at the Appomattox Court House National Historical Park. – WTF Fun Facts