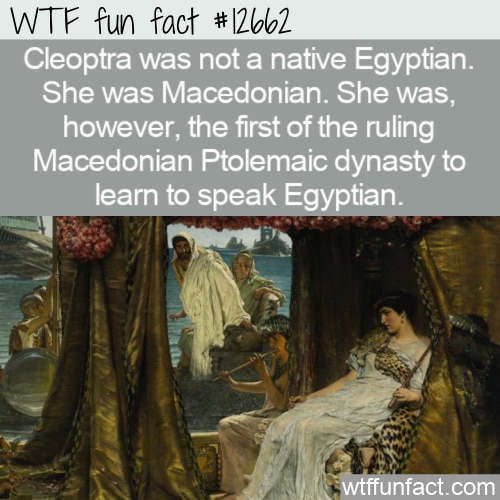 Some think of Cleopatra as the quintessential Egyptian. After all, she ruled for 21 years, and both her skills of seduction and political prowess on behalf of her territory were known throughout the world.

However, Egypt belonged to the empire created by Alexander the Great (who, incidentally, had a sister named Cleopatra) and was subsequently ruled by a family called the Ptolemys. The Ptolemaic dynasty was Macedonian, so while Cleopatra was born in Egypt, she likely had no Egyptian blood.

In the end, her ethnicity makes very little difference other than to note that the Egyptians were not being ruled by their own people at the time. There is at least some slight chance that because the ethnicity of mothers was not recorded after the time of her great-grandfather, Cleopatra could have conceivable had some Egyptian blood in her if she had been born of a concubine to the king. But we will never know for sure. The recorded wives of Macedonian kings were all of Macedonian descent.

Among the many amazing things about the powerful ruler is that Cleopatra was the only ruler of the Ptolemaic dynasty ever to bother to learn the Egyptian language.

Cleopatra herself did not maintain the Macedonian bloodline since her children were fathered by two famous Romans, Julius Caesar and Mark Antony.