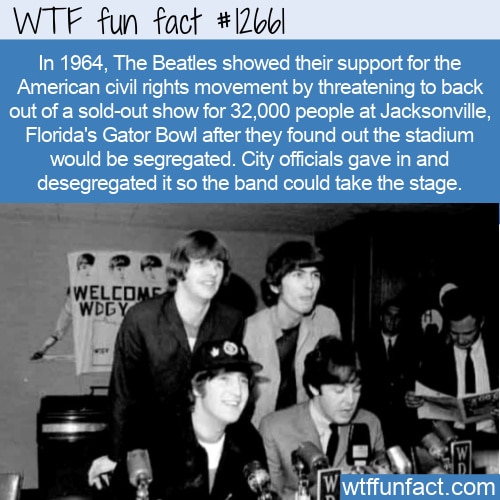 The Beatles had it written into their contract in the 1960s that they would never play in segregated stadiums.

The first time they encountered the problem was in Jacksonville, Florida in 1964 when they found out that their 32,0000-seat show at the Gator Bowl was going to be race-segregated. They said they’d rather lose the money than play for a segregated audience, forcing the city to back off the policy. It was the height of Beatlemania, and the band agreed to play once they desegregated the stadium.

But The Beatles didn’t want to have to back out of contracts with the possibility of losing money anymore, so they had it written into their contract that a crowd had to be desegregated for them to play a show and that they would still be paid if they found out at the last minute that the city hadn’t heeded this obligation. – WTF Fun Facts