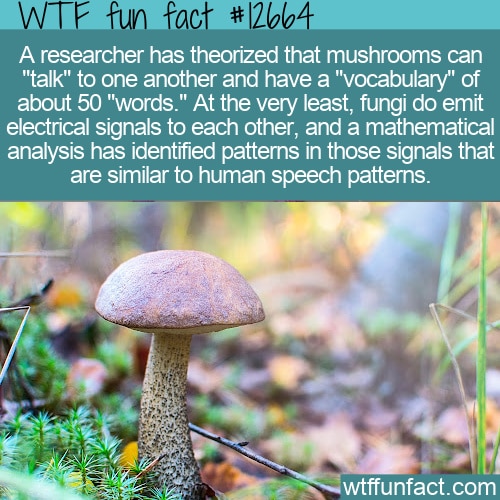 A study published in the Royal Society Open Science journal suggests that mushrooms are pretty chatty. In fact, the electrical signals fungi emit toward one another when they encounter food or danger bear a striking resemblance to human speech, at least in terms of the patterns they use.

Andrew Adamatzky of the Unconventional Computing Laboratory at the University of the West of England noticed that fungi electrical signals spiked in certain situations.

Now, you can’t hear mushrooms speak, of course. Many mushrooms grow as part of a network with tiny roots and filaments connecting them underground, called hyphae – and that’s where the signals are passed.

Adamatzky admits that his experiment is a far cry from finding a secret “mushroom language,” but making the comparison allows us to understand the possible purpose of these electrical signals. In the end, they may mean nothing, but the fact that we can distinguish patterns of electrical activity in certain situations would suggest something interesting is going on.

The article reminds us:

“This is indeed quite a primitive classification akin to interpreting binary words only by sums of their bits and not exact configurations of 1s and 0s. That said, we should not expect quick results: we are yet to decipher language of cats and dogs despite living with them for centuries, and research into electrical communication of fungi is in its pure infant stage.”

Source: “Mushrooms communicate with each other using up to 50 ‘words’, scientist claims” — The Guardian