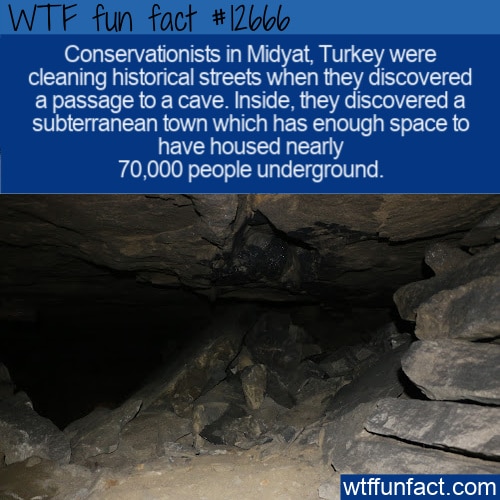 In the Midyat district of Mardin, Turkey, there is an archaeological site tunneling beneath the residents. The older residents have long been told of the city underneath, but archaeologists still had no idea what they were in for when they discovered a hidden entrance to a cave a few years ago.

The cave led to a series of corridors and rooms. But further excavation found that there was an entire subterranean city down there. And it wasn’t a city lost to time as sand and dirt piled on top of it – this city had ALWAYS been underground!

In fact, the site is so big that they will never be able to uncover all of it (partly so as not to disturb the residents living above). (You can see more of this in the video at the bottom of the page.)

Historians have found evidence in archival material that the modern city of Midyat got its name from the word Matiate, meaning “City of Caves.” Matiate’s name is mentioned in Assyrian inscriptions from the 9th century BCE.

While other underground cities have been found throughout the Anatolian region, Midyat’s is different. There is evidence that it was used to house people for nearly 1,900 years straight.

Gani Tarkan, the head of excavation for the site, explained:

“Matiate has been used uninterruptedly for 1,900 years. It was first built as a hiding place or escape area. As it is known, Christianity was not an official religion in the second century. Families and groups who accepted Christianity generally took shelter in underground cities to escape the persecution of Rome or formed an underground city. Possibly, the underground city of Midyat was one of the living spaces built for this purpose. It is an area where we estimate that at least 60-70,000 people lived underground.”

“Underneath is a different history, a different period, and above it is a different date. While the houses on the top are dated to the 17th, 18th, and 19th centuries, there is a completely different city underneath. That city is 1900 years old.” –  WTF fun fact

Source: “The excavation, which started in a cave in Turkey’s Mardin, turned into a huge underground city” — Arkeonews