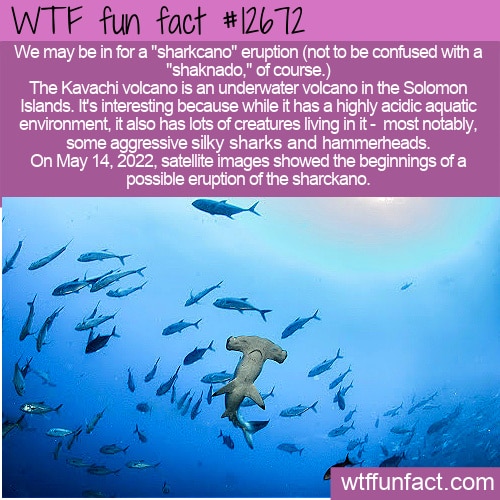 Your mother probably warned you not to swim around acidic shark-infested volcanoes, but in case she didn’t, we’re telling you now not to try it!

Only once have scientists been able to explore the Kavachi volcano in the Solomon Islands. It’s a submarine (aka underwater) volcano and it actually erupts almost constantly. But in 2015, it took a break, giving researchers the chance to check it out.

And boy did they find some stuff! It’s no surprise that they found high levels of sulfur (because it is a volcano, after all), but they were surprised to see that despite extremely acidic conditions, some creatures have managed to thrive in the craters.

There are microbial species that are common in sulfuric environments. There are also “gelatinous animals and small fish.” Oh, and a whole bunch of angry sharks.

According to IFL Science, oceanographic researchers said this is “raising new questions about the ecology of active submarine volcanoes and the extreme environments in which large marine animals can exist.”

And while that’s really cool, we’re more interested in the phenomenon they dubbed “sharkcano.” The researchers wrote: “Two species of shark, the scalloped hammerhead Sphyrna lewini and the silky shark Carcharhinus falciformis, approached the baited camera multiple times in an aggressive pattern; in some cases, sharks appeared to be swimming from greater depths inside the crater.”

Now, before you picture thousands of sharks spewing out from the depths of the ocean floor (which is the first thing we pictured), it’s definitely not going to be that wild if this volcano has a major eruption. It will, however, be a really bad time to go swimming in that area.

NASA images showed a plume developing in late May, so we may be in for a sharkcano eruption sometime soon and we’ll be able to see precisely what that entails. –  WTF fun fact

If you want to learn more: