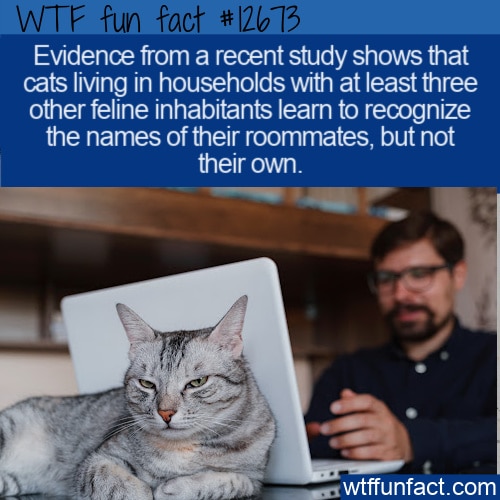 In unsurprising news, there’s more evidence that cats don’t care about something.

Japanese researchers did a small study (which is really all you can do when cats get involved) and found that cats seem to recognize the names of their feline housemates. However, they still don’t give any indication of recognizing their own. Whether it’s because they just don’t care is something we’ve yet to figure out.

Why should we even care what words cats recognize? Well, IFL Science put it in context the best: “Birds with vocal cords that can imitate our own can learn a variety of human words, and it’s argued some know the meaning, rather than merely mimicking. Apes taught sign language also understand the meaning of words, and more recently dogs have been found to be able to learn up to 12 toys’ names in a week – but what about cats?”

In other words, we do all of this behavioral research on animals and find these fascinating signs that, in some sense, they can organize the world in ways similar to our own. So why not take a look at these abilities in some of the most common pets?

The research was conducted by Saho Takagi, a PhD student at Kyoto University who published the results in the journal Scientific Reports. The research team tried an experiment with domestic cats living in a 3+ cat home as well as residents of Japan’s famous cat cafes.

The study does rely on one important assumption (but if you know anything about science, you know that this is often the case since that’s where we start in order to help prove things). The assumption is that like other animals, cats stare longer than normal when they are surprised by something. In this case, hearing a name they recognize.

So the team spoke to the cats and said the names of their fellow resident cats to see if they would get a reaction. And they did, at least when the cats didn’t just run off in the middle of the experiment (and one did).

But what’s interesting is that this only happened in households, not in cat cafes. And in cat cafes there tends to be a lot of turnover from adoptions (and a lot more names to remember). So it may be that the cats in those cafes never hear a name enough time to have it ring a bell.

Apparently, the cats only reacted to the spoken names. Seeing their feline roomies’ photos on a laptop didn’t have any effect. Also, hearing their own names had no effect.

There were only 19 cats involved in the study, so it’s right to be skeptical. But that’s where we often start in science. The study still showed there was statistical significance to the results, and that’s typically a sign that further research can continue until there’s enough evidence to constitute some kind of “proof.”

In the meantime, just take it as a sign that your cat ignoring its name is not necessarily them blowing you off. They may just not be able to recognize that a name belongs to them. Or they just don’t care.

IFL Science explains this is not Takagi’s first cat study: “Last year she was first author on a paper exploring the feline capacity to map the spatial location of their person or a familiar cat. Takagi and co-authors reported the cats showed surprise when speakers broadcast the voice of the person who feeds them, despite that person’s absence. The same reaction did not apply to recordings of familiar cats’ vocalizations or unrelated sounds. Previously she studied cats’ understanding of the law of physics.” –  WTF fun fact

Source: “Cats Can Learn Each Other’s Names, Not Just Their Own, Study Claims” — IFL Science