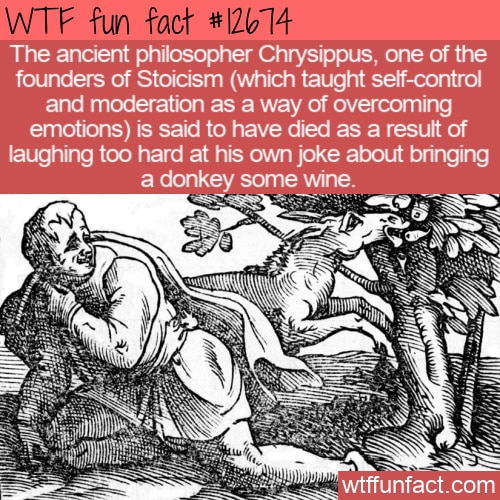 Whoever said laughter is the best medicine probably never read about the death of the ancient Greek Stoic philosopher Chrysippus of Soli.

At the age of 73, the master of Stoic ethics and logic and leader of the Stoic School attended the 143rd Olympiad, which took place from 208 to 204 BC. At some point, a donkey came along and ate some of the figs he had with him. He found this hilarious, saying “Now give the donkey a pure wine to wash down the figs!” (Ancient humor doesn’t really translate well to the present, in case you haven’t noticed.)

The story is that Chrysippus laughed so hard as his own joke that he eventually fell to the ground and started foaming at the mouth. The people around him tried to help, but he died.

(Note that another story of his death is that he became dizzy and died after drinking undiluted wine at a feast.)

But the real question is, could the first story really have happened?

Technically, yes. You can die laughing.

Uncontrollable laughter can cause a heart attack, asphyxiation (which leads to a lack of oxygen), and can lead to a loss of muscle control causing you to collapse and fatally injure yourself. But it’s extremely rare.

However, there have been other stories of people laughing themselves to death. King Martin of Aragon is said to have laughed to death upon hearing a joke by his favorite court jester in 1410 (though indigestion seems to have played a role). Pietro Aretino apparently died by suffocation while laughing in 1556. And reports say that in 1660 a Scottish aristocrat, Thomas Urquhart, laughed so hard at hearing that Charles II was king, that he died laughing. And there are more modern cases too.

Do we believe them all? No. But it’s not impossible. –  WTF fun fact

Source: “This Greek Philosopher Died Laughing at His Own Joke” — Culture Trip