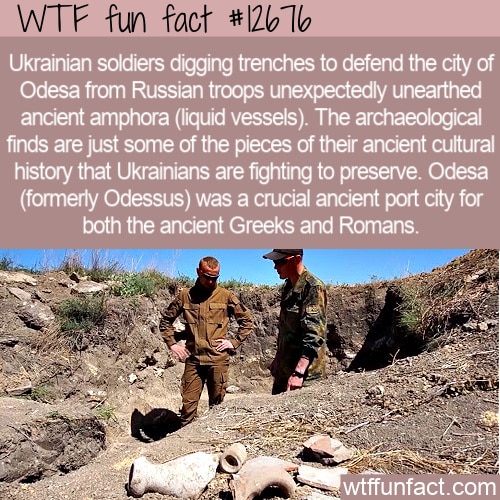 There’s nothing “fun” about the Russian invasion of Ukraine, but the fact is that war turns up some interesting things. In this case, more proof that Ukraine has its own unique history and culture.

Digging war trenches is not the same as digging for archaeological purposes. Nevertheless, that’s how some of Ukraine’s ancient artifacts are coming to light as they defend themselves from the invading Russians.

According to the Kyiv Independent, digging in the port city Odesa, located on the Black Sea has uncovered ancient amphorae. Odesa was once known as Odessus. Ancient sources say it was founded by the Milesians, who came from a city in what’s now modern-day Turkey. Ancient inscriptions show that it was likely under some form of democratic government shared by five ancient Greek states. It played an important role in ancient history because it was a port town, so it saw people and goods from all over the region. Its local money even had an image of the Egyptian god Serapis on it.

The modern soldiers of the Ukrainian 126th Territorial Defense found slightly more recent archaeological artifacts – ancient Roman amphorae, which have been dated to the 4th or 5th century CE. These are tall jars (and shards that often held wine or were used as decorative vessels). They shared the discovery on Facebook.

Russia has been targeting Odesa with missile strikes as well as a blockade of the port in order to disable the city’s vital operations in grain and wheat exports to the rest of the world.

If anything can be said to be “lucky” here, it’s that the amphorae are in excellent condition and have been turned over to the Odessa Archaeological Museum, which will hopefully be able to preserve this important part of the city’s history. –  WTF fun fact