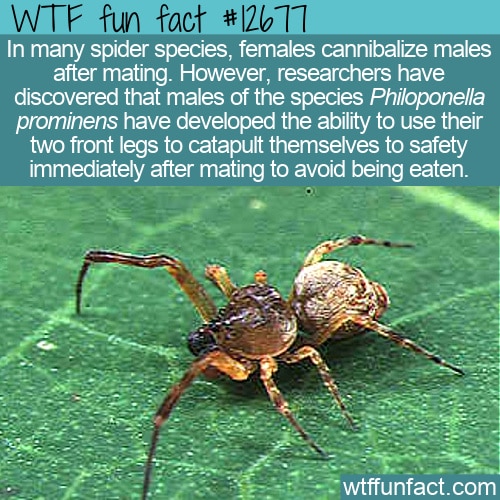 In many species of spiders, the last thing males do is mate. After that, they’ve done their job for the evolution of the species and are no longer needed. So females have evolved to simply eat them. They provide nutrients for the babies, after all!

It’s called sexual cannibalism and it’s one of the many facts of nature that we humans may have a hard time wrapping our heads around (or not, depending on your mate).

A few species have evolved to avoid this fate – for example, some may choose to amputate their own legs as a defense strategy in order to distract the females and get away (with the remaining legs, of course). In some sense, this makes sense since the female gets some nutrients and the male gets to hobble away with his life. It just seems a bit drastic from a human perspective.

Other spiders have learned to weave silk around the legs of the females before mating so they can make an easier escape afterward, which seems like a wise move as long as the female survives to produce her young.

The Philoponella prominens have developed a strategy whereby they use their two front legs to propel themselves out of reach of the females, getting away with all of their legs and their lives (if they hit the eject button in time, at least).

Since Philoponella prominens don’t have venom, the males who get cannibalized are in for a rough ride before death. The females produce over 400 feet of silk to “mummify” them, typically winding it so tight that they’re crushed and/or suffocated.

Not only are these spiders interesting for their actions but how they achieve them. Most jumping spiders launch from their back legs, so jumping using the front legs leads to some more interesting questions about the evolution of these creatures, especially since they don’t have muscles in those legs.

According to Smithsonian Magazine, the researcher who made this discovery noted that “one male was able to perform the behavior six times over the course of about eight hours, but was finally killed and eaten after his final performance–perhaps being too exhausted to spring himself to safety.”

Source: “This Male Spider Catapults Itself Into the Air to Avoid Sexual Cannibalism” — Smithsonian Magazine