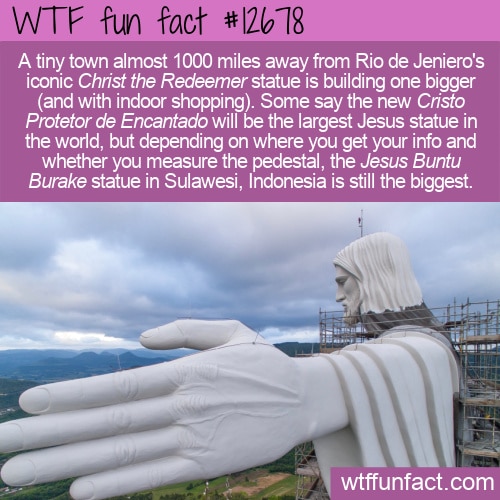 When we see scenes from Rio de Jeneiro in Brazil, their epic Christ the Redeemer statue is always part of the photo montage. However, it’s not even the tallest Jesus statue anymore – and it’s no longer the tallest one in Brazil! Of course, that all depends on whether or not you want to count pedestals.

The Jesus Buntu Burake statue in Sulawesi, Indonesia stands at 172.4 feet (131 without the pedestal), while Christ the King in Swiebodzin, Poland stands at 172.2 feet (108 without the pedestal). But feel free to correct us in the comments since it’s probably hard to get a tape measure up there and we only know what we read on the Internet (but it was from Architectural Digest)!

Rio’s statue is a mere 98 feet tall (and it’s pedestal adds another 28 feet) by comparison. But a tiny town nearly 1000 miles southwest of the city just took the Brazilan title for tallest Jesus statue away from their Christ the Redeemer.

Cristo Protetor de Encantado was built with funds raised by the Associação Amigos de Cristo, and cost of $350,000. It is also far more detailed than Rio’s (though we’re not sure that matters in the long run).

Mexico now pledges it will build the tallest statue of them all in Ciudad Victoriaat standing at 252 feet. Christ of Peace is currently being constructed.

Holy monument? Pilgramage site? Both? More than 37,500 people have come to visit so far, even before Jesus was “open for business.” When he’s done, he will have interior shops, restaurants, and viewing areas, including a glass heart to view the city from.

Now, there’s a little confusion in the press over the height of all of these status and whether or not the official tally includes the base. Smithsonian Magazine seems to think this new statue will be the tallest, however it will stand at 143 feet (43.5 meters) with the pedestal (making it the largest Jesus, but not the largest full statue. Without the pedestal, the statue is 123 feet (37.5 meters), so by our math, Indonesia’s is still bigger in that sense.

Brazil has the largest Catholic population in the world and Jesus is a big travel draw. It remains to be seen to what extent the people of this small town will benefit financially, but we’re sure it’s quite a sight nevertheless. –  WTF fun fact

Want to see a video about all of this? Here ya go:

Source: “This Statue Is Now the Third Tallest Monument of Christ in the World — and Will Open to Visitors in 2023” — Travel & Leisure