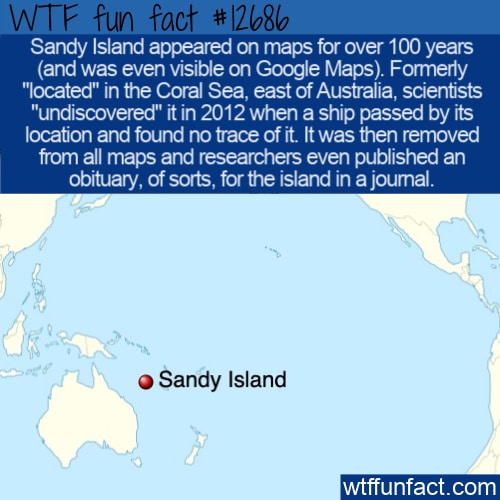 Sandy Island was 15 miles long, roughly the size of Manhattan. Or at least that’s what the maps showed in the decades leading up to 2012. It even showed up on Google Maps in the Coral Sea, east of Australia.

Discovered in 1876, the best we can guess is that there might have been a floating pile of pumice there at some point that made explorers think it was an island. In any case, they put it on a map, and there it stayed until 2012. That’s when a research crew passed by the site and realized the island wasn’t there.

As if embarrassed, everyone from National Geographic to Google quickly and quietly removed the island from their maps. (Which, let’s face it, raises some questions about maps in general and what they encourage us to believe without asking further questions.)

The truth is, the island had been “undiscovered” even before 2012 as people reported that there was nothing there and some maps labeled Sandy Island “ED,” or “existence doubtful.”

Maybe it started with a false sighting or perhaps with a simple recording error, but that error was replicated in databases for over 100 years without anyone questioning it (or looking for proof via satellite).

David Titley, a retired Navy rear admiral who spent over three decades as an oceanographer and navigator, told The Washington Post:

“When we look at these computer displays, with the three-dimensional imagery and colorized, it can give you a sense that we know more than we do. A lot of people in the Navy don’t always understand the difference between having a chart and having the survey data that formed that chart.”

There is no longer a Sandy Island on modern maps. Scientists even published an obituary for it in 2013. – WTF fun facts

Source: “The Pacific island that never was” — The Guardian