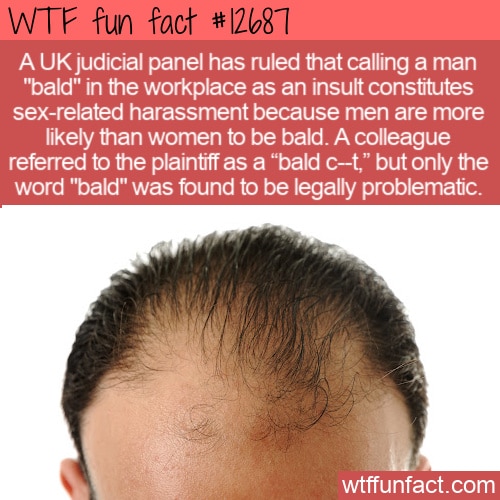 A UK judge just ruled that using the word bald as an insult in the office is now considered inappropriate because it’s a word more likely to apply to men than women. (While outlets keep reporting that calling a man bald in general now constitutes sexual harassment, that’s not what the ruling said.)

But the employment tribunal also compared calling a man bald to commenting on the size of a women’s breasts (which, well…I guess we’ll all just have different opinions on that one).

According to CNBC’s coverage of the ruling:

“Three members of the tribunal who decided on the ruling, and alluded to their own experience of hair loss, said that baldness was more prevalent in men than women. Therefore, they argued that the use of the word ‘bald’ as an insult related to a ‘protected characteristic of sex.'”

And we get it, but it’s worth pointing out that we’re all now extremely aware that women can experience baldness as well (alopecia, the Will Smith slap…anyone remember that?).

The case was brought by Tony Finn, who was an electrician for the British Bung Manufacturing Company. He was fired last year and a threat from his shift supervisor is part of the complaint. The supervisor called Finn a “bald c—”! And, no, the main problem was not the second word.

The insult was deemed a “violation against the claimant’s dignity, it created an intimidating … environment for him, it was done for that purpose, and it related to the claimant’s sex.” Again, we’re talking about the world “bald” here, not the C-word.

“The tribunal members also suggested that it was not the use of profanities that was the issue, with Finn also having being found to use such language in the workplace: ‘Although, as we find, industrial language was commonplace on this West Yorkshire factory floor, in our judgment Mr King crossed the line by making remarks personal to the claimant about his appearance.'”

Finn will now receive compensation from the company, but the amount has yet to be set.
– WTF fun facts