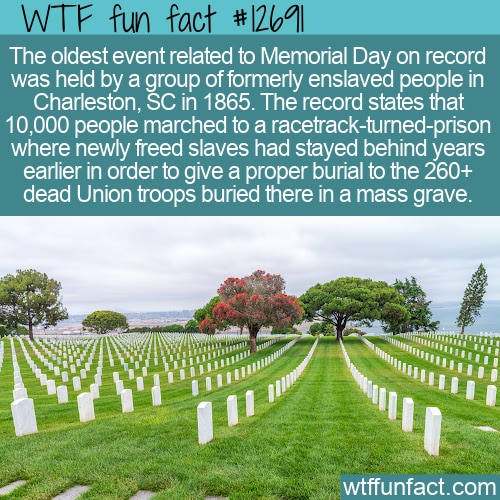 In the U.S., Memorial Day honors all military personnel who died while serving in the U.S. Armed Forces.

While the Act of Congress establishing the holiday was passed in 1968 and enacted in 1971, the roots of Memorial Day date back to the years after the American Civil War. And while Waterloo, New York, was identified by the federal government as the “birthplace” of the holiday, records show the first Memorial Day commemoration happened much farther away. (Waterloo was chosen because it hosted the first widespread, formal, annual event where businesses were closed and people visited the graves of soldiers who died in battle.)

Less than a month after the Confederacy surrendered and the Civil War ended in 1865, a group of formerly enslaved people held a celebration in Charleston, South Carolina, in honor of fallen Union soldiers.

Years earlier, the newly-freed men and women had stayed behind in order to give a proper burial to the 260+ Union soldiers who had been buried in a mass grave outside a racetrack the Confederacy had turned into a prison. The Union soldiers died of disease and exposure and were hastily buried in pits. Yet these men and women chose to honor them instead of evacuating the badly damaged city, removing them from the mass graves, and creating new graves for each soldier in a new cemetery labeled “Martyrs of the Race Course.”

The commemoration event to honor them in 1865 involved nearly 10,000 people, mostly Black with a few white missionaries, who marched to the racetrack carrying flowers. Black regiments marched in the parade while ministers recited Bible verses and a children’s choir sang. (You can read about the event in the book Race and Reunion by David W. Blight – though people still question whether there’s enough evidence to say the parade happened.)

While a file in an archive labeled this event the “First Decoration Day,” a few years later, in 1868, May 30 was chosen by the leader of the Northern Civil War veterans organization as a day to remember fallen soldiers as well. General John A. Logan called for a nationwide day of remembrance “designated for the purpose of strewing with flowers, or otherwise decorating the graves of comrades who died in defense of their country during the late rebellion, and whose bodies now lie in almost every city, village and hamlet churchyard in the land.”

Logan called the proposed holiday “Decoration Day” and chose the date because it didn’t commemorate any particular battle (thereby including everyone from both sides of the war in the memorial event).

Decoration Day was, indeed, celebrated long before there was a federal holiday called “Memorial Day.” General (later President) James Garfield made a speech while 5,000 participants decorated the resting places of the Civil War soldiers buried at Arlington National Cemetary (which contained the graves of 20k soldiers).

Later, Northern states organized Decoration Day and began to hold it on the same day every year, all declaring it a state holiday by 1890. The Southern states honored their war dead as well, but they each chose a different date to celebrate it. No one mentioned the Charleston celebration at the time.

While Decoration Day was originally a day to honor the Civil War dead, after WWI, it became a day to celebrate all the people in the military who lost their lives while serving.

The Act of Congress that created “Memorial Day” fixed that date as the last Monday in May (rather than the 30th) and declared it a federal holiday. This made it part of a movement to create more three-day weekends.

However, the story of the freed slaves who commemorated Union soldiers was lost to time, and some still reject it as a part of the Memorial Day timeline. However, the graves of the soldiers have been found and moved to a new cemetery (the re-burial was not in doubt), and some local residents grew up hearing stories about the massive parade from their grandparents. Still, it will likely never be recognized as the “first Memorial Day” (even though the title may be less important than simply remembering the story). That’s because it was only written about once, as far as we can tell. Perhaps archives will reveal more evidence in time.

As a bonus fun fact, did you know that there is a national moment of remembrance each year at 3:00 p.m. local time each Memorial Day? If you can’t make it out for a formal remembrance but want to honor the dead, a 3 p.m. moment of silence is a simpler act of reverence for those who want to acknowledge the day. – WTF fun facts

Source: “One of the Earliest Memorial Day Ceremonies Was Held by Freed African Americans” — History.com