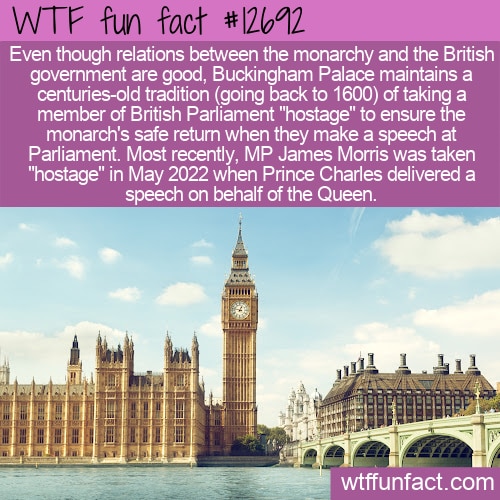 The word “hostage” seems a bit harsh, but that’s precisely what a British tradition was meant to imply.

The British monarchy began to share power with a legislative branch of government way back in 1215, with the signing of the Magna Carta. But over the centuries, the royals have become less “heads of state” and more “figureheads.”

Even though relations between the monarchy and the British government are good, Buckingham Palace maintains a centuries-old tradition (going back to 1600) of taking a member of British Parliament “hostage” to ensure the monarch’s safe return when they make a speech at Parliament. Most recently, MP James Morris was taken “hostage” in May 2022 when Prince Charles delivered a speech on behalf of the Queen.

However, that wasn’t the case in the 1600s, when King Charles I argued back and forth with parliament about how much power they should have. The people wanted a constitutional monarchy and the royals…well, they didn’t for obvious reasons.

There’s lots of detail we’re leaving out here (like an entire English Civil War, and a Second English Civil War), but the important part is that, in the end, Charles I was delivered to Parliament, where they proceeded to try him for treason, convict him, and execute him. Then for good measure, they abolished the monarchy.

So, as you might imagine, the monarchy is a little sensitive about the whole thing and while it looks like a nice joke to the rest of the world now, it’s rooted in something much more serious. Still, all the “hostage”-taking is agreed upon in advance and no one is in danger these days.

But the whole reason we’re here is that this tradition came to light on May 2, 2022, when Prince Charles gave a speech at the opening of Parliament on behalf of his mother, Queen Elizabeth II. The Queen is suffering from intermittent mobility issues, so much of the royal family went in her place. And they did, indeed, take a ceremonial “hostage.” Conservative MP James Morris said he was the designated hostage this time around. Below, you can find him giving an explanation of the whole tradition. – WTF fun facts

Source: “Buckingham Palace has a centuries-old tradition of taking an MP hostage when the Queen or one of her representatives enter Parliament” — Yahoo News